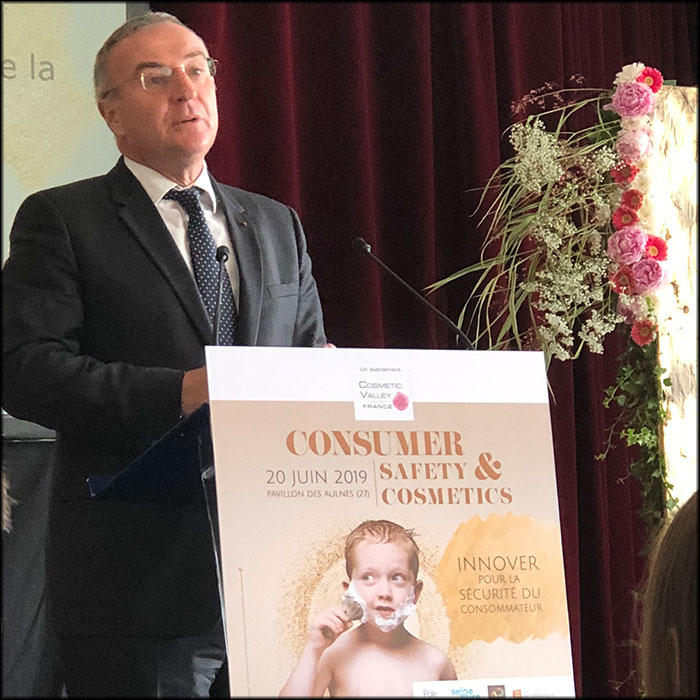 On June 20, 2019, Cosmetic Valley organized a day of conferences on the theme of consumer safety. As Marc-Antoine Jamet, President of the Cosmetic Valley, mentioned in his introductory speech, and as Charles Reinier of Cosmepar and Gaël Gervais of Analytec subsequently demonstrated, with their analyses of the evolution of cosmetic formulas since 2010, this notion seems to have been undermined today, although it is the essential basis of European Regulation 1223/2009.

“Safety is the strength of the France brand throughout the world,” recalled Marc-Antoine Jamet. “This is an important subject that concerns all actors in the supply chain, from the ingredient to the consumer, regardless of their company or function.”
However, according to the President of Cosmetic Valley, it is also a subject that faces a large number of difficulties and uncertainties, “especially because of people who are not serious about this issue, which is so serious.”

He mentioned five of them, among the most important.

2. Unlike other Western countries, it is the national agencies and French administrations that question the safety of cosmetic products. And these agencies, by the same token, introduce doubt into consumers’ minds.

3. Applications are also a problem. The DGCCRF has decided to regulate them in the food sector, so that commercial interests do not influence the judgment of the products they emit, but it has not intervened in cosmetics. As a result, a number of denigrating applications have emerged. “They appear to be a societal advance, but since they are not controlled, they are on the contrary a regression and a danger,” said Marc-Antoine Jamet.

4. Another problem cited by the President of Cosmetic Valley is the fight against waste and the return of unsold items. This is a good thing in itself, but in cosmetics, from the moment the product is opened, it must be destroyed if it is returned to the manufacturer for safety reasons. “This need for recycling that the Secretary of State for the Minister of Ecological and Solidarity Transition, Brune Poirson, is asking for should be accompanied by exceptions and accompanying measures, additional guarantees and safeguards given to the consumer, and this is not the case.”

5. Finally, sometimes, “safety is replaced by organic, which thus becomes, with greenwashing, an alibi for non-security.”

All this makes Marc-Antoine Jamet wonder about the global cosmetics market and its evolution: “We are happy to have six billion consumers, to see huge markets opening up, but the French market is regressing because of the five points I have just mentioned: denigrating applications, challenged by our agencies, greenwashing, counterfeiting, uncertainties about anti-waste provisions. Being the leader in a market that is even slightly shrinking is not a good thing,” he concluded.

The impact on the formulation

Charles Reinier, Technical Director of Cosmepar and Gaël Gervais, Head of the Analytec laboratory, then showed in a very concrete way how cosmetic safety was not only threatened but actually affected by the context surrounding it today.

Cosmepar, Cosmebac and Analytec are three independent test laboratories specialized in the analysis of cosmetic products. Since 2010, they have been analysing the evolution of the cosmetic formulas submitted for testing.

“We have already carried out this exercise in 2013, a little more than a year after the Lachaud bill to bury parabens,” recalled Gaël Gervais. “In the space of two to three years, we have seen a complete revolution in formulas: everyone has reformulated to remove parabens that have been largely replaced by MI/MCI.”

A wave of reformulations

Since 2013, there has been a relatively stable regulatory phase, marked by few major amendments to the Annexes to the Cosmetic Regulations and the “reasoned” opinions of the SCCS.
From an industrial point of view, with the implementation of GMPs, the tools are increasingly under control, with process validation, precise qualification of raw materials, flow optimization, etc.
This context should also allow the safety and stability of cosmetic products over time, but paradoxically, their formulas have never been changed so quickly: “A few years ago, when a formula came on the market, it remained on the market for five to ten years,” Gaël Gervais pointed out. “Today, it’s rare to see a product that doesn’t reformulate after three years.”

How did it come to this? Many factors come into play, sometimes diverging. Opinion leaders have changed and so have the reasons for reformulating. In the nebulous context: organic and growing environmental awareness, increased demand for efficacy and tolerance, applications such as Yuka or the impact of consumer associations such as UFC-Que Choisir, doubt about the safety of many ingredients, the “Free-from…”… And this context has a strong influence on consumer expectations, which are becoming more complex and highly changing.

The assessment presented by the two speakers is the result of more than eight years of study and analysis of approximately 180,000 formulas, all galenic combined.

The removal of parabens has radically changed the distribution of the various preservatives used in cosmetics.

Change of scenery in 2012-2013. Parabens are now found in only 6% of products, abandoned in favour of isothiazolinones, which preserve 31% of the formulas! Phenoxyethanol remains at 23%. Halogenated preservatives are up (13%) and organic acids are down (14%).

New development since 2013: isothiazolinones, initially used in large quantities, have been strongly abandoned following negative opinions from the SCCS concerning their tolerance and more restrictive regulations. Parabens are in constant decline until they are hardly used anymore. Phenoxyethanol, which was first used as a remedy, has also been steadily decreasing in recent years, with a slight increase in halogenated preservatives.
But the most striking is the current preponderance of organic acids (benzoic acid, sorbic acid, dehydroacetic acid, benzyl alcohol… and their salts): they are the only preservatives allowed in organic products, and they are present in almost half of all formulas.
Glycols (decylene glycol, caprylyl glycol, butylene glycol, propanediol…), these multifunctional ingredients used as conservation boosters are also increasingly found in all formulas.

New formulas and their safety

The three test laboratories wanted to measure the possible impacts of the new preservation strategies on the safety of the formulas, particularly at the microbiological level and on skin tolerance.

From 2013 to 2018, the laboratories recorded the distribution of pollution in the formulas (enumeration of mesophilic aerobic bacteria, yeasts and moulds) based on microbiological tests carried out at the time of product release.
Over these five years, between 84 and 88% of the products have been found free of pollution: “Over five years, we have a state of microbiological compliance that does not evolve,” commented Charles Reinier, “it does not deteriorate, but it does not improve either.”
The danger associated with the presence of pathogens was also assessed. Over the past five years, between 0.1% and 0.8% of products had at least one at the time of release.

Concerning the test challenges carried out for the PIF (Product Information File), only 3% of them were non-compliant in 2010. After the substitution of parabens, the failure rate has risen to 8% for the years 2011-2012!
After falling back to 4% in 2013, it remained stable in 2014 and 2015, before rising to around 7% from 2016 to 2018.
“Over the past three years, new preservation strategies have been sought that degrade the overall antimicrobial power of cosmetic formulations,” concluded Charles Reinier.

What the data shows
• There are no more microbiological incidents, but no less either: despite the implementation of GMPs, the overall system has not been improved
• There have been more failures on test challenges in the last three years
• New strategies make it more difficult to preserve cosmetic products

What the data doesn’t show
• There is an explosion of the presence of so-called “objectionable” microorganisms and undesirable germs that could have a pathogenic power, such as Burkolderia sp., Pluralibacter sp. or Pseudomonas sp.
• We notice a more frequent activation of the destruction processes of post-production microorganisms (thermal process, irradiation…) to compensate for microbiological non-conformities

Conclusion on microbiological safety
• Overall, the antimicrobial power of cosmetic formulations has declined in recent years
• The rate of polluted products is stagnating
• Objectively, the consumer does not benefit from an overall improvement in the microbiological safety of the products he uses
• The application of GMPs and the massive review of production tools have only made it possible to address some of the weaknesses in formula protection

For their analyses, the laboratories used two primary tolerance elements: skin tolerance by the patch test and eye irritation (cytotoxicity).

In a similar way to microbiological quality, the irritant potential of the formulas has significantly changed in recent years. In 2012-2013, 7.8% of the formulas had irritating or slightly irritating potential, compared to 5.6% in 2014-2015 and 9.6% in 2016-2018, a significant increase.
“As with microbiological safety, we see a deterioration in skin tolerance,” commented Charles Reinier.

Conclusion on tolerance
According to Charles Reinier, two avenues could explain the problems of tolerance. The first is the increased use of conservation boosters, which are found predominantly in all types of products (almost 100% in make-up formulations) and are known to facilitate transcutaneous penetration. The second is the increasing use of organic acids, which must be used in a very specific pH range: the average pH of the formulas has decreased by 1 point over the last five years…

As chemical, physico-chemical, microbiological and toxicological safety parameters are interdependent, any modification of a major functional ingredient in the formula can impact its safety, and therefore that of consumers.
“Combined monitoring during development is therefore more essential than ever,” advised Charles Reinier. “In this hyper dynamic of reformulations, we must not lose the common thread of consumer safety, whatever the media influences, of NGOs and consumer associations, which are sometimes a little schizophrenic. Reason is not incompatible with innovation,” he concluded.

Pollution of the marine ecosystem is one of the major environmental concerns of this century. Every year, millions of tonnes ...

Unanimous observation during the Lipids & Cosmetics congress, organized by Cosmetic Valley and Iterg on January 29th and 30th in Bordeaux: consumers ...

“Plastic Danger”, we hear it everywhere. Once praised, it is now condemned because of its harmful impact on nature. However, ...

They are the basis of cosmetic formulations, ensuring their textures, their functionalities, their effectiveness… But lipids today are also synonymous ...

After having monopolized the attention of the cosmetics industry for many years, the reign of the Millenials is gradually beginning ...

For several years, the issue of corporate social responsibility in the cosmetics industry has been one of the hot topics. ...

Dec. 16, 2019 The ecotoxicology of cosmetic ingredients, between myth, science and regulation p

How to assess the real ecotoxicity of cosmetic ingredients and their effects on the environment? How can we measure their ...

The Nagoya Protocol, which entered into force on 12 October 2014, aims to guarantee the sovereignty of countries over their biological resources. While ...

Dec. 3, 2019 Which restrictions to expect for microplastics? p