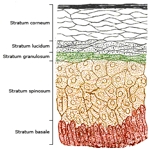 The term ‘stratum corneum’ refers to the corneal layer, the first layer on the surface of the skin. Although it is not very thick, it is actually essential to human life.

Here is an overview about the stratum corneum, which provides more services than you might think.

Formation
To explain and popularize what the stratum corneum is, Gérard Redziniak, scientific and innovation consultant in the fields of cosmetics and dermopharmacy, likes to say it ‘is created when small cells sort of go climbing. Initially, they are found in what we can call a cell maternity home, the basement membrane, which hosts small keratinocytes, the surrogate mothers that make tiny cell babies: these are other keratinocytes, which will differentiate themselves in the various skin layers.’ Then, these small cells, which were born at the base of the epidermis, grow by swelling with keratin and covering themselves with lipid cement.
Although the stratum corneum was long considered as the first layer on our skin, the one that is in direct contact with the air, today, we know it is covered with bacteria: there can be up to one million of these per square centimetre. This microbiotome stratum acts in synergy with the upper skin layer. Indeed, bacteria are useful to solidify it and make it of better quality.

Function
First, it helps keep water inside the body. Gérard Redziniak explains ‘the body is an aquarium composed of 70% of water in terms of weight, which represents about 95% of water molecules. For water to remain inside it, with its 60,000 billion cells, the stratum corneum acts like the edge of the aquarium.’
The stratum corneum is also a barrier against UV filters, thanks to the keratin and proteins contained in it. UVs are reflected and their penetration in the dermis is slowed down. Still, the stratum corneum cannot stop all these rays. As a result, sun exposure should be limited to avoid altering its nature and disturbing cell life. As a reaction to this aggression, it can also thicken and get wrinkled and dehydrated.
Lastly, it determines the skin type of each individual depending on its water content. To consider the epidermis well-hydrated, it should contain between 12 and 14% of water.
The volume of water contained in the stratum corneum can be measured with a process called corneometry. ‘Using a technique of impedance, a low electric current goes through the surface, and if it flows well, it means the skin is hydrated enough,’ Gérard Redziniak adds.

Protection
‘Body hygiene habits should be adopted, but we should not have too many showers either. The idea is to avoid disturbing the hydrolipidic film, this natural cosmetic substance at the surface of the skin which preserves the balance with the microbial stratum and the stratum corneum,’ Gérard Redziniak recommends. ‘In addition, it is better to have a shower at night, because we accumulate many pollutants throughout the day, and they directly touch the stratum corneum.’
Ultimately, Gérard Redziniak reminds that it all depends on everyone’s skin nature. He emphasizes the fact that ‘the stratum corneum varies according to our genome.’ Cosmetic answers should be adapted to every individual to best protect the skin. The stratum corneum is the first layer made by the skin to fight against aggressions, but it can be destabilized if it is attacked too much – hence the notion of prevention when we are young, and prevention and repair when we start getting old and the first signs of aging appear (skin dryness, micro-wrinkles).

Evolution
The stratum corneum changes over time. Its quality also depends on that of the keratinocytes that appear on the basement membrane, at the junction of the epidermis and the dermis. This ‘cell maternity home’, as Gérard Redziniak puts it, regenerates itself more and more slowly as we get older. When we are young, it takes about 28 days for the cells at the surface, called corneocytes, and which form the stratum corneum, to re-form. When we get 50, it takes almost two months for the epidermis to renew itself. The skin looks thinner because of the slowdown in the cellular regeneration process.

Founded in Geneva in 1973, IFRA is the International Fragrance Association, the official international body representing the fragrance industry. Its main ...

What is a cosmetic product? We all have the feeling that we know this… but we can also make mistakes ...

This logo, awarded by the private company EthicAdvisor, aims to distinguish ethical products in three dimensions: the health, the social ...

Ecocert Environment is the “responsible” branch of the Ecocert certification body.

If you want to sculpt your own face, make it glow, and brighten your complexion without too sophisticated makeup, draping ...

This acronym was introduced by the REACH regulation (on the Registration, Evaluation, Authorization and restriction of Chemicals). A chemical identified ...

Layering is a skincare ritual that comes straight from Asia. This technique consists in applying different cosmetic products on the ...

What if washing your hair with shampoo was not the ideal hair care method? Based on this principle, the co-wash ...

Displaying a flawless, radiant glow is no longer enough: complexion sculpting has become common practice in the makeup sphere. Makeup ...

Baking follows the ‘hare-brained makeup trend’. Born on YouTube, this method consists in leaving makeup on your face for quite ...

The ‘veganism’ trend is increasingly more integrated to our lifestyles. Food, textile, and cosmetics are among the industries concerned, and ...