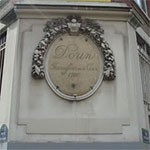 When I started working on this Cosmetotheque® project, I tried to meet some people I thought would be helpful in moving the project forward. Among these, there is Jean-Marie Hattemberg, who exercises his expertise in the limited world of collectors of perfume bottles and beauty objects.

To complete my experience, I went on his invitation to Lyon at the beginning of 2013 to visit the exhibition "Le teint entre en scène" which was organized at the Lyon City Museum . Previously presented as part of the French May Festival in Hong Kong and organised by the Consulate General of France and the city's cultural authorities, the Exhibition"Eloge du Teint - Art du Soin et Objets de Beauté depuis le XVIIIe Siècle" was held from 21 May to 03 June 2012 with the sponsorship of Guerlain. This exhibition was then repeated at the Musée Gadagne from 7 February to 10 March 2013. About 200 antique powder and powder boxes were on display. It was the subject of a publication entitled"L'Éloge du Teint" ( Praise of the Complexion - Anne Camilli & Jean Marie Hattemberg - Gourcuff Gradinego - 2012).

That's when I first heard about Dorin House. I had crossed this venerable mark well by visiting one day my friend Jean-Louis Mathiez in the premises which accommodate him rue de Wattignies in the 12th district of Paris, but I had not made the connection.

I was very intrigued, because the few products that were presented strongly suggested that this very old company had already done many things well before the others. When we started publishing files on the Cosmetotheque® space hosted by the Observatoire des Cométiques website, the case of the Dorin house immediately became an essential reference.

Michelle Vincent helped me to put together the first parts of this dossier during a visit to the museum in Chatou and a meeting with the current owners of the brand. A real treasure for all those interested in technology and old products.

I let you discover the introductory article of the thematic dossier that we have dedicated to this venerable organization. Given the richness of this collection, we decided to publish this saga in several stages.

View the articles in this issue
• Dorin House, an unparalleled heritage • Maison Dorin, or the art of make-up

"Every woman deserves a man who ruins her lipstick, but not her mascara!" Eyelashes have never been looked at as ...

Created and run by Jean-Claude Le Joliff, the Cosmétothèque is an association governed by the law of 1 July 1901 and the decree of 16 August 1901. ...