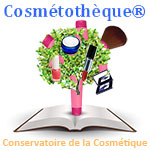 Created and run by Jean-Claude Le Joliff, the Cosmétothèque is an association governed by the law of 1 July 1901 and the decree of 16 August 1901. Its board is currently composed of Jean-Claude Le Joliff (president), André Cornevaux (treasurer) and Daniel Joutard (secretary). Its statutes are as follows;

ARTICLE 1 - NAME
An association governed by the law of 1 July 1901 and the decree of 16 August 1901 is founded between the members of the present statutes, with the title: COSMETOTHÈQUE.

ARTICLE 2 - PURPOSE AND OBJECT
The purpose of this association is to set up and manage a conservatory of cosmetics professions in order to promote, transmit and preserve this heritage and related know-how.To do this, the association will aim to record the state of the art, to find and/or reconstitute processes allowing the realization of cosmetic productsto constitute collections of old products by donations or purchases, to reconstitute the history of the brands, products, ingredients or techniques having existed with a view to the realization of cosmetic products.It will organize the communication of its actions, as well as specific events to make known these trades, products and techniques by all reasonably possible means.By retracing the history of products, ingredients, techniques, the approach of brands, through the testimony of major players in this field, the Cosmetotheque will actively participate in maintaining crafts, techniques and products in the best state of the art.

article 3 - registered office
The registered office is located at Suresnes (92150), 3 avenue du maréchal Juin (France).
This decision will be submitted to the opinion of the general meeting;

article 4 - duration
The duration of the association is unlimited.

ARTICLE 5 - COMPOSITION
The association is composed of:
a) Honorary members.
b) Benefactor members.
c) Active or adherent members.

Members may be natural or legal persons;
in the case of legal persons, they shall each be represented by a natural person designated by them.

ARTICLE 6 - ADMISSION
To become a member of the association, you must be approved by the board, which decides, at each of its meetings, on the admission applications submitted.

ARTICLE 7 - MEMBERS AND DUES
Active members are those who have made a commitment to pay an annual contribution of €50. This amount may be increased annually by a decision taken in accordance with the procedure laid down in Article 11.
Benefactor members are those who pay an entrance fee of 500 €, then an annual subscription fixed each year by the general assembly.

a) Resignation.
b) Death.
c) Removal by the Board of Directors for non-payment of dues or for serious reasons, the person concerned having been invited by registered letter to provide explanations before the Board and/or in writing. The cancellation is pronounced in ordinary general assembly on proposal of the board. Serious grounds are any action which may prejudice the purpose of the association, its proper functioning or its reputation. Any dues paid by an excluded member shall remain the property of the Association.

ARTICLE 9 - AFFILIATIONThis association is not affiliated. It may also join other associations, unions or groups by decision of the board of directors.

ARTICLE 10 - RESOURCES
The resources of the association include:
a) The amount of entrance fees and dues.
b) Grants from the State, departments and municipalities. c
) All resources authorized by laws and regulations in force;

article 11 - ordinary general meeting
The ordinary general assembly includes all the members of the association in whatever capacity they may be. It meets every year in October.
15 days at least before the date fixed, the members of the association are convened by the care of the secretary. The agenda appears on the convocations.
The president, assisted by the members of the council, chairs the assembly and explains the moral situation and the activity of the association.
The treasurer reports on his management and submits the annual accounts (balance sheet, income statement and notes) to the assembly for approval.
The General Assembly determines the amount of the annual membership fees and the entrance fee to be paid by the different categories of members.

ARTICLE 13 - BOARD OF DIRECTORS
The association is directed by a council of 4 members, elected for 3 years by the general assembly. Members are eligible for re-election.
Since the Board is renewed by half each year, in the first year the outgoing members are chosen by lot.
In the event of holidays, the council temporarily provides for the replacement of its members. They shall be definitively replaced by the next general meeting. The powers of the members thus elected shall expire at the end of the term of office of the members replaced and the Board of Directors shall
meet at least once every six months at the call of the President or at the request of one quarter of its members.
Decisions are taken by majority vote; in the event of a tie, the chairman has the casting vote.
Any member of the Board who, without excuse, fails to attend three consecutive meetings shall be deemed to have resigned;

ARTICLE 14 - THE BUREAU
The Board of Directors shall elect from among its members a Bureau composed of:
1) A President,
2) A Vice-President,
3) A Secretary and, if applicable, an Assistant Secretary,
4) A Treasurer and, if necessary, an Assistant Treasurer.

The composition of the Bureau will be discussed on this basis each year at each ordinary general meeting. The chairman and vice-chairman must be members of the board of directors
These functions may not be combined;
the chairman drives the main decisions, ensures their execution and ensures that the articles of association are applied. The vice-president assists him in his functions, and replaces him in his representative functions in case of need.
The secretary shall provide the secretariat of the association, in particular the minutes of ordinary or extraordinary general meetings as the case may be, as well as their distribution.
The accounting of the association is under the control of the treasurer.

article 15 - compensation
All functions, including those of the members of the Board of Directors and the Bureau, are free and voluntary;
only expenses incurred in the performance of their duties are reimbursed on presentation of supporting documents.The financial report presented to the ordinary general meeting presents, by beneficiary, the reimbursement of mission, travel or representation expenses.

article 16 - rules of procedure
Rules of procedure may be established by the board of directors, which shall then have them approved by the general meeting.
This possible regulation is intended to fix the various points not provided for by the present statutes, in particular those which relate to the internal administration of the association;

article 17 - formalities
The association undertakes to respect all legal, accounting and fiscal obligations that would apply to it, taking into account its activity and size.

"Every woman deserves a man who ruins her lipstick, but not her mascara!" Eyelashes have never been looked at as ...

When I started working on this Cosmetotheque® project, I tried to meet some people I thought would be helpful in ...