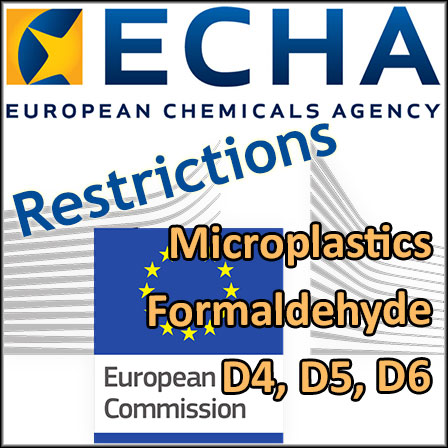 On 30 January 2019, ECHA (European Chemicals Agency) published three proposals for restrictions on substances used in cosmetics. They concern microplastics, formaldehyde and formaldehyde-releasing agents, as well as siloxanes D4, D5 and D6. The European Commission should now present within three months draft restrictions for these substances under the REACH Regulation.

ECHA has assessed the health and environmental risks posed by intentionally added microplastics, and has concluded that an EU-wide restriction would be justified. If adopted, the restriction could result in a reduction in emissions of microplastics of about 400 thousand tonnes over 20 years.

ECHA’s proposed restriction targets intentionally added microplastics in products from which they will inevitably be released to the environment. The scope covers a wide range of uses in consumer and professional products in multiple sectors, including cosmetic products.
ECHA proposes that polymers within the meaning of Article 3(5) of Regulation (EC) No.1907/2006) shall not be placed on the market ...