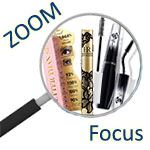 Until now, this darling of our make-up was not very pretty to look at… That will change in September. Jewelry bottles, inlays of real lace, precious sheaths decorated with flowers or Art Deco frieze, brush evoking the curves of the female body… the brands of luxury cosmetics take hold of this essential to make it an object of resolutely feminine desire.

If mascara is the most loved and used make-up products, its look, we must admit, did not unleash passions. Powerful and functional above all, it was not an object of fascination. Not the kind of product we were proud to display. It must be recognized that its ergonomics, important, is not always compatible with the aesthetic side. But in September, its technicality is combined with refinement. It becomes a real tool arty with sensual curves, combining design and beauty. An overview of the most elegant as well as the most audacious creations!

The most refined novelties…

The first one comes back to Lancôme with Grandiôse Mascara Effet Cils Déployés (10 g, 31,50 €, from August 25th). Its two main originalities: a"swan neck" stem that adapts intuitively to the morphology of the eye, avoiding everything that can hinder the fluidity of the gesture (cheekbones, nose, brow arch). It simplifies the mascara application gesture, allowing to reach the smallest lash, literally in a twist of the hand. The second originality lies in the voluptuously rounded bottle whose deep black stretches in a subtly smoky gradation. Lancôme's emblematic rose unfolds in a semi-transparent weightlessness, giving birth to the stem itself. Small plus: with this shape, the movement to take the brush out of the bottle is done in slow motion, which makes it possible to eliminate to the maximum any excess of material and to have only what it is necessary to deposit on the lashes. In addition, the double curve of the stem allows the formula to be stirred naturally at each opening, so that it remains fresh from the first to the last day.

In September, Helena Rubinstein launches her Lash Queen Mystic Blacks (7 ml, 33 €, only on the brand's website), an eyeliner mascara that accentuates the lash line, giving depth to the look. In a matt black curved sheath decorated with golden lines evoking the Orient and the moucharabiés. The brand that invented the automatic mascara also offers the Lash Queen Sexy Blacks in normal (7.2 ml, 31.50 €) or waterproof (7.2 ml, 33 €) versions. Inspired by lace and fine lingerie, this mascara appropriates the most delicate codes of femininity. The golden body of the bottle is surrounded by real black lace flowers. Let's face it, with this creation, mascara definitely becomes sexy!

…and the most daring!

Sex or erotic marketing is rampant here, a real trend (relatively new in beauty) that is all the rage among young women (in the line of Nars' Orgasm blush). We will thus have the choice between Ecstasy, Perversion or Subversion! The first is stamped with multiple Dior logos (Diorshow Ecase, Mascara Volume Oversize Immediate, 10 ml, 34 €, from 1 er September). The other two are from the American brand Urban Decay (Mascara Perversion, 22 € or Subversion Lash Primer, 20 €, at Sephora from September 15). They are presented in metallic tubes (black and engraved with purple letters for the first, white and engraved with black letters for the second). But the most explicit remains the Better Than Sex Mascara from Too Faced (8 ml, 23 €, at Sephora) ! For the latter, it is the brush in the shape of an hourglass which is inspired by the curves of the female body. With a metallic pink tube, a collagen formula and ultra black carbon pigments (so nanoparticles). It is necessary watch the video on You Tube where you see an Asian woman on the brink of swooning every time the brush passes over her eyelashes to believe it! More than ever mascara is women's best friend, but will we dare to wear makeup in public!!!! And will beauty follow the fashion of chic porn???

The Observatory of Cosmetics

Innovations in this field are quite rare, but for this spring, they abound! Liquid eyeshadow and burgundy red are the ...

Of course it’s the product that’s good right now. As economical as it is ecological, it has all the advantages ...

With their “ointment” texture, they brave the cold weather by overcoming irritations and other skin “bruises”. Renewed with a vintage ...

Be my Valentine! Unlike Advent calendars or boxes, Valentine’s Day does not take the path of CSR, but is a ...

Flowers haven’t said their last word! Although they have always had an intimate connection with beauty, until now they have ...

Straight from Asia, they multiply like buns! In jars, tubes or patches, they remove streaks and small dead skin, and ...

In hair salons, brands imagine tailor-made hydration, adapted to different hair thicknesses, textures and types. In pharmacies and supermarkets, a ...

Liquid, sauna, bright red, made of cotton woven with gold threads or seaweed leaves… Imagination has no limits in this ...

Highly “instagrammable”, it is the accessory that can make all the difference in the purchase of a facial treatment. Sold ...

This will have escaped no one’s notice, long hair is furiously trendy, especially among the younger generations (even very young ...

In the spirit of Oh My Cream (and its success), four new actors arrive in the beautiful Parisian districts at ...

It is the new claim that inspires the mascaras. Lash lift is, in fact, a salon technique that consists in ...