MBBT: an exceptional, but contradictory UV-filter Add to my portfolio
pro subscription only feature
see our subscription plans 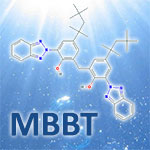 MBBT, Methylene bis-benzotriazolyl tetramethylbutylphenol in INCI lists of ingredients, is a very specific UV protective agent. It is both a filter and a screen, and efficient against UVBs and UVAs. It is synthetic, but in the nanoparticle form, and considered safe for use in Europe… with a few reservations, though.

This substance is identified by the chemical name, 2,2’-Methylene bis(6-(2H-benzotriazol-2-yl)-4-(1,1,3,3-tetramethylbutyl)phenol). It is also known as Bisoctrizole or designated with the INCI name, Methylene bis-benzotriazolyl tetramethylbutylphenol, the trade names Tinosorb®M or FAT 75’634 in its nano form, or simply the MBBT abbreviation.

In its nano-form, this yellowish powder takes the form of a viscous white dispersion, whose manufacturing process involves the use of Decyl Glucoside (as a dispersing agent), Propylene Glycol, and Xanthan gum as a stabilizer. It is used for its UV protective properties, mainly in sun creams, but also in skin brightening products, or skincare and makeup products with an SPF. It is authorized in cosmetics in Europe, at a maximum concentration of 10%.

As far as cosmetics formulators are concerned, MBBT offers numerous advantages. Its structure and properties make it a really exceptional UV-filter.

MBBT is quite rare in that it covers a broad UV spectrum, which guarantees protection against 280 to 400 nm wavelengths: both UVAs and UVBs.
It owes this property to its unique hybrid, organic structure, but it also includes microparticles down to the nano size, similarly to mineral screens (Titanium dioxide, Zinc oxide). Therefore, it can ‘accumulate’ several types of protection, chemical and physical, absorbing UVs as a filter while reflecting and scattering them as a sunscreen.
It is insoluble and is usually added to the water phase of a cosmetic formulation.

Another most precious quality is its compatibility. Virtually no single sun-blocking ingredient can provide complete, broad protection alone: therefore, they must all be combined to others, and one of the complexities of sun product formulation lies in the development of successful associations between different filters and/or screens, whether two by two or much more.
MBBT is actually compatible with a great number of them, in particular those that are most frequently used. And while it is highly stable as such and does not degrade under sunlight, it also has a stabilizing effect on other UV absorbers, particularly Ethylhexyl methoxycinnamate, which precisely lacks enough photostability.

According to its manufacturers, MBBT is obviously not toxic, not irritant, not sensitizing… even in its nano form. But if you have a look at the various Opinions published in this regard by the SCCS (European Scientific Committee for Consumer Safety), things are a little more complex: if, on the whole, experts have validated its safety of use, they did formulate a few reservations…

If the main relevant studies are available for non-nano MBBT, one can notice quite a few of them have not been conducted on the nano form.

In a first Opinion of 2013, the SCCS observed that ‘Since no appropriate data on genotoxicity of nano form of MBBT were provided, no conclusion on the safety of this substance can be drawn.’

And in the latest Opinion published in March 2015, there is another recurring indication: ‘No studies provided with nano-sized material.’ It is the case in particular for acute oral toxicity, acute dermal toxicity, skin irritation, skin sensitization, mutagenicity/genotoxicity in vivo, reproduction toxicity, teratogenicity, phototoxicity / photoirritation and photosensitization…

Therefore, it is by relying on the low skin absorption of nano-MBBT and the reduced safety margin of the studies available that the SCCS concluded that ‘These together indicate that dermal application of nano-sized MBBT with regard to systemic effects is not a safety concern,’ and that ’the use of MBBT in nano-structured form […] as a UV-filter at a concentration up to 10% in dermally applied cosmetic products is considered to not pose a risk of adverse effects in humans after application on healthy, intact skin.’

In short: no transcutaneous absorption, no penetration of the substance in the body, therefore no risk for health, even for this nano ingredient – provided that, of course, the skin is not injured (cut, burnt, irritated…), which would make it able to get through the skin barrier.

And experts actually remain careful, as they specify ‘this Opinion is based on the currently available scientific evidence, which shows an overall very low dermal absorption of MBBT in nano-or larger particle forms. If any new evidence emerges in the future to show that the nano-form of MBBT used in cosmetic products can penetrate skin (healthy, compromised, sunburnt or damaged skin) in any significant amounts to reach viable cells, the SCCS may consider revising this assessment.’

However, the validation by the European scientific experts does not mean they give manufacturers the green light.

• Inhalation
In the same Opinion released in 2015, the SCCS noted that ‘In view of the limited available information on inhalation toxicity, which indicates severe inflammatory effects of microfine MBBT in the respiratory tract, caution is warranted against the use of the material in applications that could lead to exposure of the consumer’s lungs by inhalation. This Opinion therefore does not apply to such applications that might lead to exposure of the consumer’s lungs to MBBT nanoparticles by inhalation.’
If the use of nano-MBBT is considered safe for skin applications, the same cannot be said about spray products, whose particles might be inhaled by consumers…

• Skin irritation
Experts are also concerned with the effects of MBBT on the skin. In its Opinion, the SCCS indicates that ‘In a study in rats, clinical effects (pain and vocalisation) after dermal application were noted at concentrations of 20%* (i.e.: twice the maximum authorized in cosmetics). In the carcinogenicity study, scabs were seen at a dose level of 100mg a.i./kg/bw/day and higher.’
Hence this recommendation, in the form of a warning: ‘It is worthwhile to monitor possible irritation effects via the cosmetovigilance programs.’

• Sensitization
A few case reports indicate possible allergic reactions to MBBT, but as no sensitization study was carried out using nano-sized MBBT, the SCCS has not developed this point.

• Bioaccumulation
Experts have yet another reservation: ‘Given the physicochemical properties (high lipophilicity) of the substance, potential bioaccumulation in selected tissues is of concern, especially over long-term use.’
Which can be the case of cosmetics with an SPF used on a daily basis, such as anti-aging skincare creams or makeup…

• Effects on the environment
Ultimately, the SCCS has issued this warning: ‘Due to the poor biodegradation potential, and the very high octanol-water partition coefficient, long term effects or bioaccumulation of MBBT in the environment cannot be excluded. MBBT is currently classified as Aquatic Chronic 4 H413 (’may cause long lasting harmful effects to aquatic life’ according to Annex VI of Regulation (EC) No 1272/2008 (CLP regulation). The use of MBBT as an ingredient in sunscreen products might lead to environmental exposure.’

This point ‘disappeared’ from the text when this Opinion of the SCCS was revised in June 2015 to be replaced by the following laconic comment: ‘This opinion does not address the effects of MBBT on the environment.’ For fear that explicitly mentioning the harmful potential of sun creams containing this filter on the marine environment, although it also contributes to protecting the human skin against the development of cancers like melanoma, might condemn it for good?

Whatever it be, aside from (all) that, MBBT is safe for use!

It has been adopted by written procedure on 18 March 2013, and is open for comments until April 26, 2013. The SCCS has just released its Opinion on Methylene bis-benzotriazolyl tetramethylbutylphenol (MBBT), an anti-UV filter, which fulfill the definition of a nanomaterial. 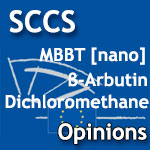 During its plenary meeting on March 25, 2015, the SCCS has adopted three Opinions on the nano-UV filter Methylene bis-benzotriazolyl tetramethylbutylphenol, on β-Arbutin, and on Dichloromethane. These Opinions are open for comments until May 22, 2015. 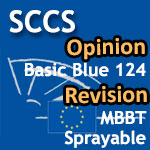 On June 25, 2015, during its 10th plenary meeting, the SCCS has adopted a new Opinion on the hair dye Basic Blue 124, revised its Opinion on the nano form of MBBT, and added some new precisions to its clarification of the term sprayable.