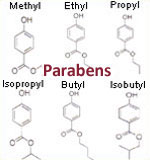 Parabens have been a hot topic for years, and they’ve been accused of all evils. While it is important to point out that they haven’t exactly been proven innocent in every case, we must also recognise that parabens don’t necessarily all deserve the bad rap they get in the media. That is why we’ve decided to examine the question in detail.

Parabens actually make up a family of ingredients. They all resemble each other rather closely, but their chemical structures differ (particularly the length of their alkyl chains), as do their scopes of action and their potential adverse effects. Clearly stated, there is not just one paraben but many, which can be used alone or in combination, to improve their action and increase efficacy.
Up until 2014, six parabens were primarily used in cosmetics. Here they are, in increasing order by alkyl chain length, as they appear on labels in the official list of cosmetic ingredients: Methylparaben, Ethylparaben, Propylparaben, Isopropylparaben, Butylparaben, Isobutylparaben.

Parabens are preservatives (parahydroxybenzoic acid esters), and they are very widely used to protect cosmetic products from bacterial and microbiological proliferation. Due to their broad scope of activity on bacteria, moulds, yeasts, and fungi, as well as their complementary nature when acting synergistically (when more than one are mixed together), they were crucial, must-have ingredients for several years. It is estimated that at their peak (about two or three years ago), they preserved nearly 80% of hygiene and beauty products, all categories combined, all around the world. For formulators and many observers, they were considered to be practical, effective, well tolerated, and risk-free. Their image has undergone changes since then…

All parabens are subject to allergen testing in Europe. They can cause contact dermatitis, which usually takes a chronic form. Yet according to the opinion of the dermatologist community as a whole, the incidence of this is relatively low. Parabens are also much less allergenic than certain natural compounds (such as essential oils) or other synthetic preservatives sometimes used to replace them, such as Methylisothiazolinone and Methylchloroisothiazolinone , for example.

In 2004, a study by Dr Philippa Darbre put an end to the comfortable consensus that surrounded parabens at the time. Her conclusions, which received a lot of attention in the media, linked parabens with breast cancer. The study was highly controversial and has since been debunked, as no other experiments have been able to confirm such a direct relationship. But the AFSSAPS (now known as the ANSM, France’s drug and health product safety agency) nevertheless admitted that ‘ in vitro studies on cellular models had revealed the oestrogenic properties of parabens, which could explain the increase in the incidence of cancerous breast tumours ’.

Today it appears that the main toxic potential of parabens comes from their ability to disrupt the endocrine system, particularly in the case of parabens with the longest alkyl chain. In 2005, the AFSSAPS noted that ‘ toxic effects of Propylparaben and Butylparaben on reproduction had been revealed in young rats, according to studies carried out with doses that could be compatible with human exposure, suggesting a potential risk for male fertility ’. The AFSSAPS then announced that ‘complementary studies would be needed to specify the risk related to using these preservatives ’.

It is important to be aware that the endocrine activity and toxicity of parabens increases with the length of their alkyl chains. The longer the alkyl chain, the more potentially dangerous the paraben. Because of this, Methylparaben and Ethylparaben have been considered safe for use by the AFSSAPS and by the SCCS (Europe’s Scientific Committee on Consumer Safety), while serious doubts about the safety of parabens with longer chains abound, especially since it has been proven that all parabens are capable of crossing the skin barrier and penetrating into the body.
Doubts almost became a certainty after several opinions of the SCCS (in 2010 and 2011), and were confirmed in 2013. It was recommended to significantly restrict the use of longer chain parabens: Butylparaben and Propylparaben.
The risk applies particularly to babies and young children, and is even greater for them because their skin is more highly permeable than adult skin, and because the effect of endocrine disruptors is particularly dangerous at this stage of life.

Just a single study, by a group of researchers from the Tokyo Medical University, addresses this question. But it inculpates the paraben with the shortest alkyl chain (which is supposedly the safest one to use): Methylparaben. In 2006, these Japanese researchers showed the capacity of this substance to accelerate skin ageing and encourage the appearance of wrinkles during exposure to UV radiation, at concentrations similar to those found in cosmetic formulas (including sunscreens) and in sun exposure conditions analogous to those experienced on a day in the summer.

Today, several parabens are authorised for use in cosmetics, across all categories of products, even though reservations have been expressed at different times by scientific committees or other bodies.
As of April 2014, only Isopropylparaben, Isobutylparaben, Phenylparaben, Benzylparaben, and Pentylparaben have been prohibited, due to the lack of data to evaluate the safety of using them.
In September 2014, the European Commission followed the opinions of its expert Committee and published a regulation to limit the use of Butylparaben and Propylparaben . From now on, when both are present in a cosmetic product, the sum of their individual concentrations should not exceed 0.19% as esters, that is, 0.14% as 4-Hydroxybenzoic acid. In addition, they are banned in leave-on products designed for being applied on the nappy area of children under three.
All the other parabens, when used on their own, are limited in concentration at 0.4% of the finished product (as acid) by European regulations. If more than one of these substances are combined, the maximum authorised concentration is limited to 0.8%. These doses are reputed to guarantee the safety of consumers and preserve their health, even though this reassuring statement issued by the health authorities is not unanimously accepted.

Indeed, another aspect of the potential toxicity of parabens comes from excessive exposure to these compounds. 0.4% in a shower gel + 0.4% in a shampoo + 0.4% in a day cream = an accumulation of different parabens we are in contact with from three products used on a daily basis. And this doesn’t factor in all the other cosmetic products we might use, not to mention the parabens we could consume in the form of food additives (E214 to E219).
But today we are more aware of the significance, especially for endocrine disruptors, of exposure from multiple sources. The levels of each compound are not really what count. Even if, taken individually, they are considered to be safe, they can have dreadful effects when added to one another. Parabens are not necessarily worse than other substances, but since they are present everywhere, the ‘cocktail effect’ is considerably amplified.

Parabens in my bathroom?

Must all parabens be absolutely avoided in all products? Avoiding parabens completely may seem particularly difficult since they are still in wide use, especially if you want to continue using cosmetics with a preservation system that is sufficient to guarantee their protection from microbiological growth. And seeing the words ‘Preservative-free’ or ‘Paraben-free’ printed on a label is not necessarily more reassuring than a series of parabens listed in the ingredients.

But we can always apply a reasonable principle of precaution:
• Systematically avoiding longer-chain parabens, particularly in the case of babies and pregnant women (Propylparaben, Butylparaben)
• Accepting only products that contain a single paraben or at most two of these substances (to limit the cocktail effect), and always preferring short-chain parabens (Methylparaben and Ethylparaben)
• Taking care to create a personal range of cosmetics that use different preservation systems: if some products contain parabens, ensure that the others, especially those intended to be regularly used simultaneously or on the same day (moisturiser + foundation, shampoo + conditioner, etc.), contain no parabens.