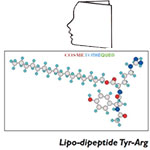 Peptides are an exceptional class of ingredients that have strongly contributed to the advancement of cosmetic responses to various questions. The Cosmétothèque® has been trying to contribute to their recognition by publishing contributions on this theme for several months. The part related to biopeptides is probably the most fascinating…

From the beginning, Karl Lintner has helped us to decode these different facets. Today, with the contribution of the Sederma team, he is leading us to discover another peptide as exciting as the previous ones. Thanks to them.

Peptides often surprise us. In general, and this is their speciality and advantage, oligopeptides whose"Peptides" section in the Cosmetotheque® proposes to relate the history over the last 25 years, have a specific activity that is strongly linked to their composition in amino acids and, even more, to the sequence of these amino acids in the peptide, called"the sequence". As a reminder, as indicated in the previous contribution If the order of amino acids in the chain is not the same, two peptides with identical amino acid composition may have very different biological activities. Two independent publications (Lintner K, Peschard O: Biologically Active Peptides: from a lab bench curiosity to a functional skin care product. Int J Cosm Sci  2000; 22: 207-218; Leroux et al. Shaping Up. Soap Perfumery&Cosmetics  2000 (12)), are witness to this: the Palmitoyl-Gly-His-Lys peptide stimulates collagen synthesis in dermal fibroblasts and contributes to the reduction of wrinkles. in vivo Palmitoyl-Gly-Lys-His peptide helps in the fight against cellulite and excess fat.

Moreover, these peptides are rather known to each possess a unique activity and not to be"factotums" ("fait-tout" for non-latinists) like retinol for example. However, exceptions exist, and the reasons for these a priori surprising behaviours are not always well elucidated or understood.

Here is an example

A publication by researchers at Kyoto University (Japan) described the discovery of Tyr-Arg dipeptide with analgesic activities. The mechanism seemed to be based on the fact that this peptide, injected into the brain of rats, released another peptide from the enkephalin family whose ability to bind to the morphine receptor is now known. These enkephalins are therefore our endogenous analgesics (derived from beta-endorphins well known as"happiness molecules"). It was necessary a trigger of the release of endorphins following a pain, it was named Kyotorphine by these researchers.

After reading this article, Sederma's researchers, interested in all that was peptide in nature, asked themselves the question of translating this discovery into an interesting and innovative active ingredient for cosmetics. There was obviously no question of the slightest injection of this peptide into any part of the body of consumers with sensitive skin in order to see the cutaneous or other effects.

Nevertheless, an extensive bibliographical search revealed that enkephalins had been identified within the epidermis, near nerve endings sensitive to environmental influences and aggressions. In addition, the release of a larger peptide called POMC (proopiomelanocortin) by keratinocytes (e.g. under the influence of UV) had been documented. However, enkephalins are a small fragment of beta-endorphins, themselves fragments of POMC. The expert who works in this field knows that the skin is a very complex organ just like the brain, to which it is connected…

The hypothesis was: if Tyr-Arg releases enkephalin in the brain and if enkephalin is found in the skin (the first target of any painful aggression), would it be conceivable that Tyr-Arg has a similar, soothing, calming activity on the skin? All that remained was to demonstrate it.

Knowing how difficult it was for a small hydrophilic peptide to penetrate the stratum corneum, the use of Kyotorphine as it appeared unpromising and constituted a real challenge. Based on previously published studies on peptide penetration through the skin versus lipopeptides, it was decided to modify Tyr-Arg to remove the charged groups, attach a lipophilic entity and then make the peptide more bioavailable in the skin viable. Thus was born the N-Acetyl-Tyr-Arg-O-hexadecylester, (NATAH). This derivative of Kyotorphin, would it still keep its activity? Any modification of a molecular structure could modify or even abolish the bioactive characteristics and had to be verified. NATAH genomic studies confirmed that beta-endorphin release was stimulated by small amounts of NATAH in human keratinocyte (NHK) culture medium.

After having previously ensured the safety of NATAH by appropriate and relevant studies, the proof of concept of a painkiller for sensitive skin remained to be demonstrated by a clinical study. Several studies have concluded on the efficacy of this peptide. - The Dermscan laboratory proposed a protocol based on Sensitherm* with a TTT probe modified for the circumstance. A gradual increase in temperature on the skin (on the back of the panelists) induced by this probe makes it possible to determine the thresholds of"warm","hot","very hot" and"painful" sensations and to form the"baseline" on the 21 panelists, after application and cutaneous absorption of a cream containing either NATAH, or the same cream without NATAH (the"white" or"hot" sensation). placebo ). This experience showed a significant increase in perception thresholds following the application of the cream to NATAH. This made it possible to document a reduced sensitivity of the skin to heat. The Sensitherm® is a device that is equipped with the TTT probe ( transient thermal transfer toire) regularly giving the skin temperature. This parameter is correlated with the skin's condition and makes it possible to evaluate certain parameters such as hydration or the level of inflammation. • A parallel study, using capsaicin as a pungent skin agent ("stinging test"), completed the first result but for chemical aggressions. - The third protocol, developed by the Spincontrol laboratory with Prof. Aubert of the University of Tours, using a modified"polygraph detector", is described in a scientific publication (Mas-Chamberlin C, Mondon P, Peschard O. et al: Quantifying skin relaxation and Well-Being. Cosmetics & Toiletries Magazine  2004; 119: 10-14). This study, also conducted against placebo confirmed the calming and anti-irritating effect of this NATAH peptide. It will finally be marketed under the name Sensicalmine®, then, after reformulation, Calmosensine®. INCI name: Butylene glycol, Aqua (Water), Laureth-3, Hydroxyethylcellulose, Acetyl dipeptide-1 cetyl ester.

What was unexpected, and brings us back to the introduction of this contribution, was the discovery by Sederma researchers, through a screening program on firming actives, that this NATAH dipeptide also stimulated elastin synthesis on human fibroblasts (NHDF). Not only did the peptide increase the amount of tropoelastin produced, but it also helped in the shaping and correct arrangement of the microfibrils and elastic fibers needed to ensure real functionality of the elastin secreted. The image opposite shows the effect of skin tightening following the use of the peptide. All this work has also been published in two parts (P Mondon, A Andre and K Lintner, Part I: The in vitro effects of a natural dipeptide on the biological cascade, Cosm & Toil  127(7) 510-515 (Jul 2012) ; Mondon, S Fache, E Doridot and K Lintner, Part II: The Clinical Effects of a Natural Dipeptide on the Biological Cascade, Cosm & Toil  127(9) 658-664 (Sept 2012)).

How and why does it work? - Is it an indirect effect of NATAH, acting on keratinocytes, which causes a cascade of effects down to the fibroblasts (additional protection against painful external aggressions)? - Or an independent effect, discovered by chance ("serendipity", as the English say)?

Formulated in an excipient adapted and different from Calmosensine®, the NATAH peptide dedicated to the firming activity is marketed under the name IDEALIFT®. Peptides certainly still have many surprises in store for us. However, it must be ensured for each new candidate that they do not go against the interests of the skin, consumers and toxicologists.

May 16, 2018 Cosmetic innovation: repair and rejuvenation of the JDE by a polypeptide,"Cebeline".

The dermis and epidermis are connected by an adhesion zone centered around the basal blade, called the Dermo-Epidermal Junction or ...

Light control in cosmetics began with the effects of pigments and fillers used to modify colour perception or skin appearance. ...

The first references to blue skin can be found in mythology… and are also found in large TV sagas or ...

Oct. 11, 2017 The most valuable ingredient in the cosmetics industry: water

In the cosmetics industry, water is the main ingredient, first of all quantitatively, but also because of its importance in ...

Neophytes or automatic spell checkers often confuse ceramics and ceramides. Although the spelling is quite similar, their functions and characteristics ...

Nov. 8, 2016 A magical white powder from the formulator: Lauroyl lysine

In the lipopeptide saga, we have already described several substances that are very often characterized by their biological properties. But ...

Polymers based on the silicon atom in combination with oxygen, silicones find their origin in the work of Berzelius who ...

Some substances have particularly marked the history of science and technology and have left an indelible mark. This is the ...

In a previous contribution, we put into perspective the different fields of use of talc in cosmetic formulations. We take ...

Talc has been a major ingredient in the cosmetics industry since time immemorial. The Cosmetotheque has already discussed its use ...

In a previous contribution concerning anti-ageing active ingredients, the use of placental extracts had been addressed briefly. There have been ...

The Cosmetotheque® is not intended to be a technical and scientific watch, and that is why we only talk about ...