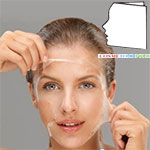 In a previous contribution concerning anti-ageing active ingredients, the use of placental extracts had been addressed briefly. There have been many varieties of placental, human, animal or plant extracts. It is necessary to clearly distinguish the different variants which have been used, and which are no longer used, except in exceptional cases…

In this contribution, Professor Marie-Claude Martini discusses the use of some of these extracts. We thank him for that.

The saga of placental extracts began in 1930 when a Russian ophthalmologist, Vladimir Filatov, a corneal transplant specialist, noticed better results when the transplanted corneas were kept cold or subjected to desiccation for some time. He then hypothesized that any living tissue put in a situation of suffering manufactures and releases bioactive elements intended to keep its cells alive. Although it was not known at the time what the chemical nature of these elements might be, they were called"biostimulines". (We now know that these mysterious biostimulins are peptides very close to growth factors, which explains their action).

Filatov's theory was then applied to other animal tissues and in particular to the placenta which, by its function, was likely to provide bioactive elements.

From 1950, placental extracts were used in cosmetics, but they very quickly became a Lyon specialty. Indeed, the Mérieux laboratory, located in Lyon, had a technique for extracting gammaglobulins from placentas of human origin. The tailings were rejected.

Professor Cotte, hospital pharmacist and biologist, had the idea of valorising them by applying Filatov's theory to make enriched extracts capable of promoting cell renewal.

These extracts were then manufactured and marketed by the company Gattefossé, based in Lyon. In 1959, Bernard Guillot, the company's pharmacist, developed a"Placentor" cream, particularly effective for the treatment of burn victims, an experienced cream at the Saint-Luc hospital in Lyon. Subsequently, placental extracts were used by the cosmetics industry as active ingredients in creams for facial rejuvenation. They had considerable success, supported by numerous scientific studies which effectively demonstrated an undeniable activity on cell metabolism by increasing oxygen consumption, an action on cell proliferation of fibroblasts in culture, a real effectiveness on cell life. The European Centre for Dermocosmetology in Lyon, created by Prof. Cotte, actively participated in this research in collaboration with university laboratories.

In addition to the creams, serums and various balms reserved for local application, certain clinics, most often foreign, used placental extracts in injections or implants to ensure the rejuvenation of the entire organism, practices related to aesthetic medicine. But everything was for the best in the best of cosmetic worlds.

Alas, the appearance of AIDS in the 1980s threw a chill on this enthusiasm. All placental extracts of human origin were removed from cosmetics by legislative prohibition and replaced by placental extracts of bovine origin. The creams and serums, always in evolution of formulation, accommodated themselves very well until the animals also became suspect with the development of the famous bovine spongiform encephalopathy and ovine in the Nineties. Although the disease is localized to certain parts of the body, the precautionary principle led a large number of cosmetic firms to eliminate them from their formulations. However, a few countries, including Switzerland, have always used them and still use them for rejuvenation cures, claiming that they were supplied from the United States, which remained safe from the epizootic. The danger currently seems definitively removed but mistrust remains.

The placental extracts of the past have thus been replaced by other cellular stimulation factors and in 1991 we saw the appearance of what, by mimicry, was called plant placenta. Bernard Guillot was again at the origin of this product which he marketed under the former name of"Placentor". In 1996, a complete range based on plant placenta was put on the market by the Sicobel company, also located in the Lyon suburbs. She is still doing the fine days of parapharmacy.

May 16, 2018 Cosmetic innovation: repair and rejuvenation of the JDE by a polypeptide,"Cebeline".

The dermis and epidermis are connected by an adhesion zone centered around the basal blade, called the Dermo-Epidermal Junction or ...

Light control in cosmetics began with the effects of pigments and fillers used to modify colour perception or skin appearance. ...

The first references to blue skin can be found in mythology… and are also found in large TV sagas or ...

Oct. 11, 2017 The most valuable ingredient in the cosmetics industry: water

In the cosmetics industry, water is the main ingredient, first of all quantitatively, but also because of its importance in ...

Neophytes or automatic spell checkers often confuse ceramics and ceramides. Although the spelling is quite similar, their functions and characteristics ...

Nov. 8, 2016 A magical white powder from the formulator: Lauroyl lysine

In the lipopeptide saga, we have already described several substances that are very often characterized by their biological properties. But ...

Polymers based on the silicon atom in combination with oxygen, silicones find their origin in the work of Berzelius who ...

Some substances have particularly marked the history of science and technology and have left an indelible mark. This is the ...

In a previous contribution, we put into perspective the different fields of use of talc in cosmetic formulations. We take ...

Talc has been a major ingredient in the cosmetics industry since time immemorial. The Cosmetotheque has already discussed its use ...

Peptides are an exceptional class of ingredients that have strongly contributed to the advancement of cosmetic responses to various questions. ...

The Cosmetotheque® is not intended to be a technical and scientific watch, and that is why we only talk about ...