Brexinfinite: here we go again for a… flexible postponement Add to my portfolio
pro subscription only feature
see our subscription plans 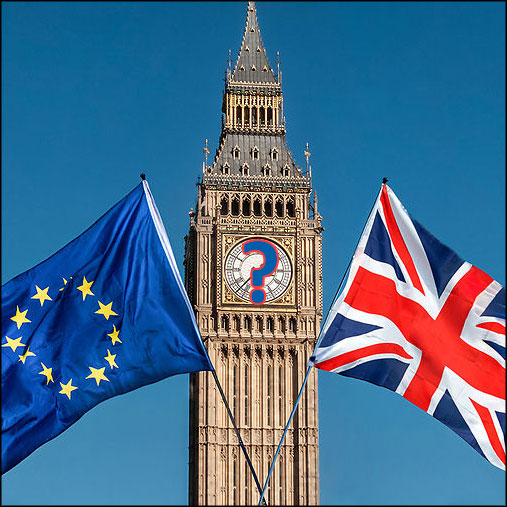 It wasn’t March 29, 2019 as planned. It was also not on April 12 as announced. On the night of 10-11 April, EU leaders and British Prime Minister Theresa May agreed to postpone the Brexit until 31 October. A flexible period, during which all scenarios are possible.

No one wants a hard Brexit, a sudden exit from the United Kingdom of the European Union without agreement or transition period, nor do companies and European leaders. Hence this new compromise, which was hard-won and announced in the early hours of April 11.
It provides for a further postponement of Brexit by a “flexible extension until 31 October”. Six short months during which the United Kingdom has several options, depending on the negotiations between Theresa May and the House of Commons.

• Option 1 : Exit on May 22, 2019
If the British House of Commons finally ratifies the withdrawal agreement before the European elections scheduled for 23-26 May, the Brexit takes place on 22 May, with a transition period.

• Option 2 : Exit on June 1st, 2019
If the withdrawal agreement is not accepted by the British Parliament by 22 May, the United Kingdom must organise the European elections. If it does not fulfil this obligation, it leaves the Union, without agreement, on 1st June.

• Option 3: Exit no later than October 31, 2019
If the United Kingdom holds these elections (what about the British MPs who would be elected after a possible withdrawal?), it has until 31 October (the day before the new European Commission will be appointed) to find a solution, which can be:
> a vote in the House of Commons in favour of the withdrawal agreement for a soft Brexit, as soon as the agreement is ratified,
> one (or more?) negative vote(s) for a hard Brexit on October 31st,
> or (who knows?) a decision by the United Kingdom to cancel everything, to give up Brexit and stay in the European Union.

In short, as the European Commission advised a few months ago, it is better to be prepared for… all scenarios!

In 2019, the French cosmetics industry once again achieved a strong performance abroad: the sector exported nearly €16 billion of products, an increase ...

As part of its partnership with CosmeticOBS, Business France announces that, on December 31, 2019, China’s General Administration of Customs (GAC) announced ...

The first half of January always marks a period expected by ingredient suppliers. This is when the Cosmétagora trade show, ...

After many twists and turns, the Brexit is here. Multiple scenarios have been studied, but as of January 31, 2020, the United ...

The Millenials (or Generation Y) have fascinated the beauty industry for several years now. Born between 1980 and the year 2000, they have ...

The objective of ISO 17516:2014 - Microbiology - Microbiological limits, is to define acceptable quantitative and qualitative limits for finished cosmetic products. ...

It’s become an institution. Every year, in mid-January, the SFC brings together all the ingredient suppliers to present their latest ...