Batch numbers and bar codes: what do they mean? Add to my portfolio
pro subscription only feature
see our subscription plans 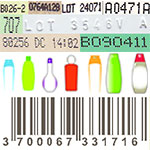 These series of numbers and initials may seem quite obscure, and therefore pretty useless. And yet, if they are mandatory on cosmetics labels, it means they do have role to play, that of giving information. And all consumers can understand and learn how to use them, whenever needed.

We are all used to seeing bar codes on consumer goods, and cosmetics are no exception, as regulations also require a batch number to be indicated on their packaging. Though we hardly ever pay attention to them, they do provide necessary information to identify our products, and in certain cases, this can actually be crucial

It is the basis of a product’s traceability.
The batch number is mandatory on any primary packaging (jars, tubes, bottles… in contact with the formula) and secondary packaging (cardboard cases…). Only one special dispensation has been provided for: if, for practical reasons, it is impossible to follow this rule due to a cosmetic product’s reduced dimensions (most often makeup), it is authorized to indicate the number on the secondary packaging. There is no regular place for it, as it can be on the fold of the tube, at the bottom of the jar, at the top of the bottle… but it must be somewhere.

It is not really codified: its shape and the way it is developed are up to the manufacturer. It can appear as a series of numbers and/or letters, a date, a random figure… What matters is the precise identification of the product batch.

This indication guarantees the product’s traceability and proves extremely useful, in particular in case of an undesirable effect related to its usage.
Then, the batch number makes it possible to efficiently track down what is responsible for it (it can be an ingredient, an impurity in a raw material batch, an error in the manufacturing process…), since a thorough file is associated with each batch, including the supporting documents corresponding to all the elements involved in the development and manufacturing of the product batch. This way, everyone knows where, when, with which ingredients, how, and in which conditions these products were made.
So, it is this number that consumers must give their doctors and/or manufacturers in case of an undesirable reaction, whether they experience a mere pimple breakout or an allergy. And it is also this number that will be used to launch investigations and determine whether the reaction actually results from the product, and if it does, from which of its characteristics.

In addition, in case of a defect identified on a batch, this number enables to quickly withdraw all products concerned from the market so as to avoid other undesirable effects on other consumers… As a result, it is systematically mentioned in warning or withdrawal procedures.

Here is another series of numbers: the most common bar code counts 13 of them. It was designed to identify consumer goods as unique products.

It should be noted that a same item, let’s say a rose-scented cleansing milk developed by a given brand, only has one bar code, but can bear several batch numbers, if it was manufactured several times during the marketing period… even if its formula can change a lot over time.

Thanks to the bar code, the product is identified according to several parameters corresponding to the various successive series of numbers:
• The country of origin (the first 2 or 3 numbers), more exactly that of the manufacturer’s headquarters
• The company’s code (next 4 or 5 numbers)
• The product’s code (next 5 numbers)
• The check key (very last number)

Besides, this code identifies exactly which company produces which cosmetic product, even if it owns several brands.

And there is no need to learn all numbers by heart! The Global Electronic Party Information Register (GEPIR) database is available online here . It compiles the list of product bar codes of more than a million companies all around the world!