Cosmetics: how is efficacy proven? Add to my portfolio
pro subscription only feature
see our subscription plans 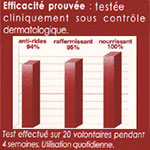 Tests provide evidence and figures sometimes appear on labels to back up efficacy promises. Is that a “plus” compared to those that only make promises without evidence? It all depends on what the figures say, and what they represent…

In a way, “evidence” is here to justify promises and give them credit with arguments that make consumers believe what they read, at least enough to buy the product. It is not always provided by manufacturers – they are not bound to do that. They can just state their products’ efficacy without giving any detail, thus relying on the brand’s fame to appeal to consumers, or on the mere impact of advertisements. However, when evidence does appear, it is worth analysing it, including the mentions printed in the smallest characters…

Manufacturers may use various methods to convince potential customers. These methods always remain in their hands, but also depend on the means available: an explanatory text based on well-established and common knowledge on the properties of the raw materials used is obviously cheaper than setting up clinical efficacy tests, for instance.

Describing the actives
First, arguments may be printed on labels to present the main components in the cosmetic product, when these are to produce the effect claimed.

They can thus be listed, often under the same name or designation as the product. If the product is to be applied around the eyes, cornflower extracts and camomile floral water may be put forward. Then an anti-wrinkle cream will focus more on its argan oil or hyaluronic acid, and a slimming product will highlight caffeine. In the end it is up to consumers to determine the relevance of these actives in the formulation.

Manufacturers may also provide more exhaustive details on the properties of the main components in the product formula. In this case information can more often be found at the back of the label, as part of the arguments. At first sight, this listing is more interesting because it gives more information. However, it can also bring a few surprises: indeed some raw materials may be credited with qualities that are not always mentioned in the scientific literature!

Presenting test results
Manufacturers can provide arguments as evidence of their promises by mentioning the results of tests that they outsourced or performed themselves. “Tests prove it”, the famous formula, is less and less used as such, that is, without any more details, although “effects proven” can still be found without any other indication to back it up. However in this case, test results are most often provided, at least part of them, with a few figures and a short explanation on the protocol used.

There are “tests” and “tests”

It is better to have a close look at each figure and each word to fully understand the meaning and value of the tests presented… and, again, to have a few good questions in mind.

What do tests mean to test?
Tests can focus on a specific active or the finished product, which does not have the same value. In the end, there is no guarantee that the active’s performance, which is assessed separately, apart from any formulation, will be exactly the same when it is actually part of the finished product. The results, which are most often obtained in a laboratory, independently of any other factor or interaction, may be radically altered, depending on the dosage, the synergy – positive or not – with the other raw materials found in the composition, and the stability of the ingredient itself within a complex formula, or on the epidermis.

Which protocol was used?

Of course, the more people the test process involves, the more significant the results will be. Would a survey be relevant if it were carried out on 10 or 20 people? That is actually the kind of panel cosmetic tests usually present…

In addition, it is estimated that the complete process of skin regeneration takes about 28 days. The actual action of a cosmetic product could therefore only be assessed after 4 weeks. As a consequence, the test duration is also significant in judging the value of the results, and again there can be a few surprises…

The product frequency of use during the tests should also be verified, when this information is given. If tests were performed on a twice-a-day basis, the same results may not be expected if the product is only applied once a day! 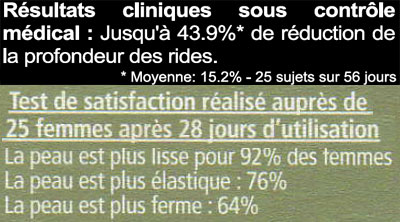 Efficacy tests or satisfaction tests?
These are not the same, and they even represent two radically different notions.

An efficacy test measures the effect observed on the skin with objective methods and accurate instruments. Several elements can thus be assessed, such as the depth of a wrinkle and its evolution after using the product, the factor of skin roughness to quantify a degree of smoothing, the epidermis moisture level…
In this case, the figures announced represent almost scientific values and may be considered relevant enough.

Satisfaction tests mirror a very different truth.
They consist in asking volunteers who are given the product, and may be paid, to use the product and give their opinion or feeling on its action by filling in a questionnaire.
“Have you felt any comfort on your skin when applying the product? Do you have the impression your skin is more flexible? Have you observed any improvement in terms of tightness?”… One is tempted to add another question here: do you know any moisturizer that does not give the sensation of producing all these effects?

One thing should be known: the topics – and the formulation – of the questions asked in these tests rarely allow for negative answers, especially when considering the state of mind of the “guinea-pigs”, who can only see advantages in participating (and possibly renewing their participation in the next tests scheduled on other products).
This way, record percentages – never less than 95% - are easily obtained, and willingly displayed! Isn’t that convincing? Maybe at first glance. But it is still better to take these results for what they are.