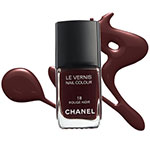 The nail polish saga at Chanel began in 1974 with the relaunch of a range of lipstick and associated nail polish. It was the first brick of the global beauty approach that Chanel proposed on the market under the name of"Black and Gold" range.

This first range consisted mainly of traditional varnishes, the shades were mainly bright reds as it was customary to have at the time. Some pearly products balanced the range and made it a complement to that of lipstick.

Under pressure from various events, particularly regulatory, a change of formula was envisaged in 1995, leading to a new range of products entitled"Le Vernis". As part of this reformulation, several elements are reworked, such as the elimination of thinner in favour of solvents, the development of new resins, making the product more compatible and more stable, and the addition of additives such as"bioceramics" and ceramides, which will make it one of the very first coatings on the market. Bioceramics are ultra finely ground coral algae extracts that supplement the nail with mineral elements to strengthen it. Ceramides are differentiation products that appear in keratinized structures, such as the skin, nail or hair. The ceramides used in this case are of synthetic origin to optimize their purity level as well as their efficiency. For this exercise, new shades will be created and the range updated regularly.

It is in this context that this particular shade will be born, which will be called"Black Red", and which has strongly marked this category of products, both within the brand and on the global market. However, this product was born from a rather particular approach. Nowadays, it would be a case of serendipity. Indeed, chance and naivety presided over the first days of this product.

At the time we had systematized"mixology" sessions in the laboratory where, in a rather unbridled exercise, technicians and make-up artists worked together and in real time on the development of new nuances. This exercise was carried out with the close collaboration of Heidi Moravetz or Dominique Moncourtois, make-up artists at Chanel. In the laboratory, the contributors were essentially the colorists, Ginette Malfait and Marie-Rose Imbert in particular.

The sources of inspiration were quite variable. During one of these sessions, a rather strange mixture was made in the make-up studio by"illegitimately" mixing products that should not have been mixed together, but expected for one of the fashion collections of the time. In the end, an atypical varnish was born and it was then question of transforming this improbable prototype into finished product! This was the work of the colorists in close interface with the studio. Very happy with their achievement, the team presented the product to the person in charge of research for those years (Jean-Claude Le Joliff), ". as it did not respect the rules of formulation of the moment, my first reaction was to"grumble", not to say more, on the non-respect of the procedures, by burning more or less the actors", says Jean-Claude Le Joliff. But he adds, " as the product was unexpected, and had made as one says"a box" to the collection, quite quickly we agreed that we had no choice but to look a little further into what it was about. It then became legitimate to be impertinent in relation to the usual rules . We then put in place new tests to qualify it, and this hue was born" . Right from the product launch, the success was immediate, to the point that the shade alone combined spectacular sales, clearly superior to those of the other shades in the range.

This hue revived a colour that Mademoiselle particularly appreciated and used, as these lines from an article in the US Vogue of May 15, 1926 (p. 92), entitled"…. Seeing the mode in colour "and about colour in fashion in general: Chanel's favourite red:"Next to black and white comes red, the garnet colour, like the inside of a black cherry, which Chanel uses a lot and which is often called'black-red'.

With a few other rare shades, as later the Particulière 505 shade, the red-black will create a family of atypical products, prelude to what happened then with the multiplication of very unusual shades of varnish, green, yellow, blue, to see things even more improbable, making that little by little this product, the varnish, all accounts made rather banal, will become an essential instrument of the"Fashion victim".