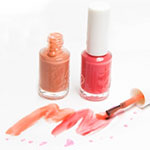 Nail polish has become one of the leading products in the cosmetics industry, and make-up in particular. In its current form, it is the last great make-up product that has been designed and has been a huge success… after a long history.

The concept of manicure began in India with the use of henna as a nail paint over 5,000 years ago. This practice will spread and be adopted by different cultures. It is believed that the people of Babylon took the lead by going a little further to 4,000 BC by turning to solid gold to achieve the perfect manicure.

Nail polish seems to have been invented by the Chinese around 3000 BC. However, Japanese and Italians still think they were the first to use nail polish. The Chinese used a coloured lacquer, made from a combination of gum arabic, egg whites, gelatin and beeswax. They also used a mixture of flower petal powder mixed with alum. This composition, when applied to the nails for a few hours or all night, left a pink to red color.

In China, during the Zhou Dynasty around 600 BC, royal families also used gold and silver to embellish their nails. A 15th century manuscript cites red and black as the colours chosen by royalty in previous centuries.

The Egyptians, for their part, used reddish brown dyes obtained from henna to colour their nails but also their fingertips, a dye still frequently used today. The color of the nails indicated social rank. Queen Nefertiti coloured her fingernails and toenails ruby red. Cleopatra preferred an intense rust tint. Women of lower rank who coloured their nails were only allowed to use pale shades, and no woman dared display the colour palette used by the king or queen.

The Incas are known to have decorated their nails with representations of eagles. The rest of the history of nail polish is unknown, it seems to have fallen into oblivion for centuries, to finally reappear in the nineteenth century.

A renaissance in the early 19th century

In the early 19th century, nails were dyed red with perfumed oils, then ground and polished with chamois leather, rather than simply painted. This practice will be repeated a century later since women will continue to polish their nails by massaging them with tinted powders and creams to make them shiny, or probably the name"nail polish". Such a polishing product sold at that time was paste Graf's Hyglo .

A number of women during this period dyed their nails with clear, shiny varnishes applied with camel hair brushes.

Towards the 1920s, the creation of paint for the automobile inspired a French make-up artist, Michelle Ménard, who proposed enamels of colours for nails. But his product is of poor quality and it will quickly compete with the one developed by a Quebecois, Charles Revson, with his brother Joseph and a chemist, Charles Lachman (the L of Revlon!).

Painting as a source of inspiration

Their invention is based on the progress made in the field of paints and in particular on the work of valorization of the important stocks of gunpowder resulting from the First World War. These will give rise to a particular category of varnish, cellulosic varnishes, a variant of which will be nail polishes.

The principle of this product is to form a coloured and resistant film on the nail surface by evaporation of solvents that have previously dissolved a specific"forming film".

The varnish quickly became fashionable, matching the lipstick ( Charles Revson would have been shocked to have seen a woman put a hand to her mouth with a varnish swearing with her lipstick and thus launched the concept of harmony between nail polish and lipstick ). The Hollywood stars appropriate it, and it is the apotheosis, it enters the pantheon of Make Up.

Revlon, 1st to introduce nail polish in the USA, will compete with less known brands in Europe such as Cutex, Sally Hansen created in the early 50s.

In Europe, this family of products took off in the post-war years, and in 1962, the Dior brand launched a nail polish. It will be one of the very first luxury brands to venture into this market.

The reference brands will be Mavala, Chen Yu, Inoxa. From 1970, the main beauty players gradually launched product ranges, and to date, all brands specializing in makeup present one or more ranges of nail polish. There are even important brands totally focused on this family of products, such as Essie or O.P.I, illustrating the intense fight that now exists in this niche, with the advent of this product as the main tool of"fashion victims". In the USA, the start-up Lacquerous launched in 2012 an offer allowing women to exchange their nail polishes instead of buying them. Without spending a fortune, it is then possible to always be at the forefront of the latest trend colour!

- From yesterday to today's formulation: See Following this article