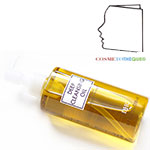 Make-up removal is an essential act in beauty routines. There are many types of products on the market that perform this function effectively. Today, the Cosmetotheque is interested in the formulation concepts underlying the category of make-up remover oils, one of the oldest products.

Make-up removal is based on two fundamental principles: - the dilution of products and impurities on the surface of the skin, then their removal by wiping or rinsing it is in this category that make-up removal oils are found, but also creams and cleansing milks, including cold cream which has been presented for a long time for this function, - the use of substances that"wet" the particles to be removed to make them easily compatible with water; in this case, it is mainly micellar water, certain cleansing milks such as make-up removers in the shower or ablution products such as foaming creams and all soaps, with or without soap.

Make-up remover oil should spread easily over the skin. Having more affinity for makeup and impurities than water, it traps them and eliminates them easily.

The basic ingredients used in cleansing oils or possibly in cleansing milks are mainly mineral oils or fatty acid esters.

For a very long time, petroleum-based mineral oils were widely used. They are still, but have been partially replaced by chemically comparable products, hydrocarbons, but of vegetable origin, derived from sugar cane or olive, not to be confused with olive oil (Vegetal squalane). Synthetic hydrocarbons obtained by hydrogenation of isobutylene (Hydrogenated polyisobutylene) are also sometimes offered.

Varieties of volatile oils, therefore light, of hydrocarbon type, such as isododecane or isohexadecane and more generally light isoparraffins, are also used to reduce the sensation of fat. These oils have a very good solvent power against traces of make-up and impurities. At the beginning of the 20th century, very fatty creams based on mineral oils (cold cream) were commonly used to perfect make-up removal.

These are two product formulas launched in 2016 and representative of these two classes.

• Self-emulsifying cleansing oils A well-known variety is called"self-emulsifying cleansing oils". The idea is to add an ingredient that emulsifies the water at the end of the operation, making it easier to remove the products to allow a more pleasant operation. The fatty residue remaining on the surface of the skin is less important. Among the most famous and oldest products is the famous Shu Uemura Cleansing Oil, launched in 1960, which remains an emblematic product. Here is its INCI after its reformulation in July 2012. According to the manufacturer, in order to perfect its mythical Advanced Formula, Shū Uemura has enriched it with Ultimate 8 Complex: an exclusive combination of eight exquisite botanical oils, specially designed to target eight specific skin problems. Ultime 8 complex not only cleanses the skin: it nourishes it, smoothes it and perfectly brightens the complexion. ZEA MAYS,  ETHYLHEXYL PALMITATE,  ISOPROPYL MYRISTATE,  CAPRYLIC/CAPRIC TRIGLYCERIDE,  BUTYROSPERMUM PARKII BUTTER,  POLYGLYCERYL-10 DIOLEATE,  OCTYLDODECANOL,  POLYGLYCERYL-6 TRICAPRYLATE,  PHENOXYETHANOL,  SQUALANE,  SIMMONDSIA CHINENSIS OIL,  CARTHAMUS TINCTORIUS OIL,  CAMELLIA OLEIFERA SEED OIL,  DICAPRYLYL ETHER,  DICAPRYLYL CARBONATE,  PARFUM, ,  LINALOOL,  LINALOOL, ZINGIBER OFFICINALE ROOT EXTRACT, 2-OLEAMIDO-1,3-OCTADECANEDIOL,  .

Vegetable oils are little used or in low concentrations. These oils have a relatively low solvent power, which makes them less efficient in these applications. All the basic ingredients used in these specialities are perfectly tolerated, often very pure and very stable, used for a long time. From this point of view, they are significantly more efficient than vegetable oils in this type of application.

We will see the other formulas later.