Organic cosmetics: a sign from the COSMOS! Add to my portfolio
pro subscription only feature
see our subscription plans 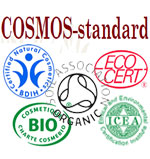 natural and organic cosmetics is coming soon. We have already announced so much, hoped for, waited for the first certifications that we were beginning to lose faith in them and think that this new standardized charter would have died before we had lived. And then we just received a proof of life! In the form of a press release: yes, the COSMOS-Standard is still moving!

It is dated May 18, 2010.
The COSMOS-Standard statement announces the constitution of an AISBL, e.g. an International Non-Profit Association, whose founding members are the professional associations BDIH (for Germany) and COSMEBIO (for France), the French certification bodies ECOCERT Greenlife and Italian ICEA, and the British consumer association SOIL ASSOCIATION.

It is, the text specifies, a “new step in the process of harmonization” between the different labels.
The next one being “to finalize the harmonization of procedures and the approval system for certifiers to inspect/certify according to COSMOS-Standard.”.
A little more patience, so…

COSMOS, it's for tomorrow! (All right, rather the day after tomorrow…)

We have been hoping for this for several years. We talk about it, we imagine it, we expect it… but waiting for the standardized European specifications for natural and organic cosmetics have tended to be like waiting for Godot. However, it does come in. As proof, the meeting of Cosmébio ...

COSMOS, after all, is… for next year!

The harmonisation of the different European organic cosmetics labels was a dream… until the various negotiations underway made us think that it would become a reality. “He’s coming,” they said…. We’re not saying anything else today. We’ll just have to wait a little longer….

What will be the dominant organic label of tomorrow? While Cosmos is still skating and a new European reference system is in preparation on the Colipa side, Natrue is advancing its pawns by announcing an offensive and innovative communication approach that includes a new website, a Facebook page, a Twitter ...