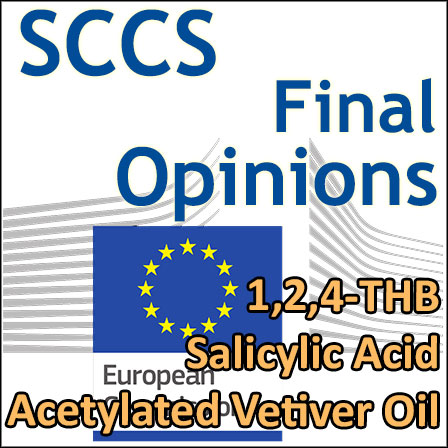 The SCCS has just published its final Opinion on the safety of the hair dye ingredient 1,2,4-Trihydroxybenzene (1,2,4-THB), which includes some modifications compared to the previous version. The Scientific Committee also introduced corrigenda to its final Opinions on Salicylic acid (preservative and cosmetic active ingredient) and Acetylated vetiver oil (fragrance ingredient). These three texts were adopted at the plenary meeting on 20-21 June 2019.

The SCCS adopted its Opinion on the safety of the hair dye ingredient 1,2,4-Trihydroxybenzene (1,2,4-THB) (A33) (No.CAS: 533-73-3) during its plenary meeting of 21-22 June 2018. This Opinion has been subject to a commenting period of a minimum eight weeks after its initial publication (from 2 July 2018 until 10 September 2018).
Comments received during this time were considered by the SCCS.
For this Opinion, comments received resulted in the following main changes: physico-chem part, chapter 3.3.7 and its SCCS comment, chapter 3.3.11 and its SCCS comments as well as their respective parts under discussion and conclusion. References have been added.

For a full background information, see the articles
• Salicylic acid, Hair dyes: four requests for Opinion to SCCS of 2 January 2018
• Acetylated Vetiver Oil, 1,2,4-THB: 2 Opinions of the SCCS of 9 July 2018

1. In light of the data provided, does the SCCS consider 1,2,4-trihydroxybenzene (1,2,4-THB) (A33) safe for use as an auto-oxidative hair dye in permanent hair dye formulations, not requiring the action of peroxide, with a concentration on-head of maximum of 2.5%?

On the basis of all the data submitted by the Applicant, and data available in open literature, the SCCS does not consider 1,2,4-Trihydroxybenzene safe due to potential genotoxicity when used as an auto-oxidative hair dye component in ...