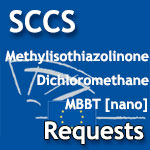 The Scientific Committee on Cosmetic Products and Non-Food Products (SCCNFP) adopted two opinions on "Methylisothiazolinone" respectively in March 2003 (SCCNFP/0625/02) and in April 2004 (SCCNFP/0805/04).
On the basis of those opinions Methylisothiazolinone (MI) was listed in Annex V/57 of Regulation (EC) No 1223/2009 to be used as preservative at maximum concentration of 0.01% (100 ppm) in cosmetics products.

According to several Member States and some literature, the sensitization to MI is becoming an increasing problem all over Europe, particularly with sensitization in young children from moist toilet paper/hygiene moist tissues or cosmetics and, in light of this information, the Commission requested to the Scientific Committee (SCCS) a reassessment of the safety of the MI when it is used as preservative in cosmetics products at maximum concentration of 100 ppm.

The scientific opinion (SCCS/1521/13) on Methylisothiazolinone (P94) Submission II (Sensitization only) was delivered in March 2014 with the following conclusion:
Current clinical data indicate that 100 ppm MI in cosmetic products is not safe for the consumer.
For leave-on cosmetic products (including 'wet wipes'), no safe concentrations of MI for induction of contact allergy or elicitation have been adequately demonstrated.
For rinse-off cosmetic products, a concentration of 15 ppm (0.0015%) MI is considered safe for the consumer from the view of induction of contact allergy. However, no information is available on elicitation.

The Commission received new data from Cosmetics Europe concerning safety of MI in rinse-off and hair leave on products in June 2014 and new cosmetovigilance data are expected for the end of 2014. Considering that the concentration limit of MI to 15 ppm suggested by SCCS is based on the data related to the mixture MCI/MI (SCCS/1238/09) and according to Cosmetic Europe 15 ppm would be insufficient for effective preservation in the majority of commercially available products, the Commission finds it appropriate to request the safety evaluation of MI in rinse-off and leave-on hair cosmetic products.

1. On the basis of the data provided, does the SCCS consider Methylisothiazolinone (MI) to be safe for consumers, when used as a preservative in rinse-off products up to concentration limit of 100 ppm from the view of induction of contact allergy?

2. On the basis of the data provided, does the SCCS consider Methylisothiazolinone (MI) to be safe for consumers, when used as a preservative in leave-on hair products up to concentration limit of 100 ppm from the view of induction of contact allergy?

3. Does the SCCS have any further scientific concerns with regard to the use of Methylisothiazolinone (MI) in cosmetic products?

Dichloromethane (CAS No 75-09-2) is currently listed in Annex III (Entry 7) of the Cosmetics Regulation (EC) 1223/2009 to be used as solvent in cosmetic products with concentration limits up to 35% and furthermore, when the substance is mixed with 1,1,1-trichloroethane, the total concentration must not exceed 35%. In addition, under column (h) "Other" entry III/7 states "0.2% as maximum impurity content". The safety of these use conditions were confirmed by two scientific assessments in 1987 and 1989.

The latest opinion of the Scientific Committee on Consumer Safety (SCCS) of 11 December 2012 on the safety assessment of Dichloromethane with concentration up to 35% in cosmetic products concluded that:
"…Based on the available data on exposure by hair spraying and limited data on neurobehavioral and neurodevelopmental effects of dichloromethane after short-term exposure, dichloromethane in a concentration of up to 35% in hair sprays is not considered safe for the consumer" (SCCS/1408/11)

Following these conclusions, in August 2014 EFfCI (the European Federation for Cosmetic Ingredients) has provided new data on the neuro-behavioural effects and the exposure-related observations in humans of Dichloromethane.

1. In light of the new data provided, does the SCCS consider Dichloromethane (CAS No 75-09-2) safe when used in cosmetic products under the current use conditions up to maximum of 35%?

2. Can the SCCS assess whether the restriction on purity present in column (h) is related to purity criteria for the dichloromethane itself or is related to its presence as an impurity in cosmetic products that should be restricted to 0.2%?

3. Does the SCCS have any further scientific concern regard the use of Dichloromethane in cosmetic products?

Further information
• Full text of Request for a scientific opinion: Submission IV on Dichloromethane (CAS No 75-09-2) .

The substance 2,2'-methylene-bis-(6(2H-benotriazol-2-yl)-4-(l, 1,3,3-tetramethylbutyl)phenol) (MBBT) (CAS No 103597-45-1), Methylene bis-benzotriazolyl tetramethylbutylphenol (INCI) (COLIPA S79) is currently regulated in Entry 23 Annex VI of the Cosmetics Regulation (EC) 1223/2009 with the maximum concentration of 10% in cosmetic products such as sunscreens, day care products and skin lightening products. The safety of mentioned use conditions was confirmed by the Scientific Committee on Cosmetic Products and Non-Food (SCCNFP) in 1998 following submission I by COLIPA (SCCNFP/0080/98).

Submission II on MBBT was submitted to the Scientific Committee on Consumer Safety (SCCS) in January 2013 to assess the safety of its nano form. The SCCS opinion concluded that:
"Since no appropriate data on genotoxicity of nano form of MBBT were provided, no conclusion on the safety of this substance can be drawn. However regarding systemic effects there seems no concern for the dermal application of nano-sized MBBT." (SCCS/1443/11)

In August 2014 BASF has transmitted a new safety dossier that summarizes analytical and toxicological results obtained for genotoxicity studies performed with nano and non-nano forms of MBBT.

1. In light of the new data provided, does the SCCS consider Methylene bis-benzotriazolyl tetramethylbutylphenol (CAS No 103597-45-1) safe when used in cosmetic products in its nano forms under the current use conditions up to a maximum of 10%?

2. Does the SCCS have any further scientific concern regard the use of Methylene bis-benzotriazolyl tetramethylbutylphenol in cosmetic products?

The SCCS has just published its Opinion on the safety of the hair dye ingredient Indigofera Tinctoria. It was adopted ...

The SCCS has just published its Opinion on the safety of the preservative and anti-dandruff agent Zinc Pyrithione in cosmetic ...

The SCCS has just published its final Opinions on the safety of UV-Filter Methoxypropylamino Cyclohexenylidene Ethoxyethylcyanoacetate (S87) and hair dye ...

The SCCS has just published a corrected version, dated December 6, 2019, of its Final Opinion on the solubility of SAS (Synthetic ...

Dec. 10, 2019 Aluminium in cosmetic products: Opinion of the SCCS p

The SCCS has just published its new Opinion on the safety of aluminium and its compounds in cosmetic products. It ...

Following the mandatory notifications of the ingredients in the form of nanomaterials under the Cosmetics Regulation 1223/2009, the European Commission asked ...

Nov. 13, 2019 Dihydroxyacetone for hair colouring: Opinion of the SCCS p

The SCCS has published its Opinion on the safety of Dihydroxyacetone as hair colouring ingredient. This Opinion has been adopted ...

The SCCS has just published its final Opinions on the safety of hair dye ingredients, Hydroxypropyl p-phenylenediamine and its dihydrochloride ...

The SCCS has just published a revised version of its Guidance on the Safety Assessment of Nanomaterials in Cosmetics. The ...

The SCCS has just published it Opinion on the AAT (Allergy Alert Test), the standardised method proposed by Cosmetics eUROPE ...

The SCCS has published its Opinion on the safety of a hair dye ingredient, Tetrabromophenol Blue (C183). This Opinion has ...

The SCCS has published its Opinion on the safety of a hair dye ingredient, Methylimidazoliumpropyl p-phenylenediamine HCl (A166). This Opinion ...