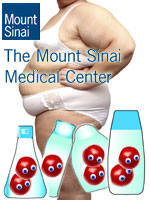 Almost every day, a piece of information is incriminating the endocrine disruptors, chemicals able to counter balance the smooth functioning of our hormonal system. Today, a team of American researchers points out phthalates in the overweight problem. Be aware that these "chemical calories" may also be present in the cosmetics we use every single day!

July 19, 2011
Is your shampoo a cause for fattening? Indeed, a warning is sent by Mount Sinai Medical Center, in New York, team of researchers. As per their data, phthalates, widely used in the plastic industry as well as in cosmetics as plasticizing or film-forming agents, solvents or denaturating agents for Alcohol (especially in fragrances ) are able to interfere with the natural process that controls our body weight, which is hormone-balance dependent.

To get these data, the researchers have tested urine of 330 girls living in New York. As Professor Philip Landrigan, the manager of this study, says, " The heaviest girls have the highest levels of phthalates in their urine ".

The New York researchers make a link between the exposure of children to phthalates and the obesity problems that occur when adults, thanks to a daily use of cosmetic products , body lotions or soaps.

This would be even worse with a slimming diet, using cosmetics with phthalates making worse their harmful potential, then. " In men, the nutritionist Zoe Harcombe says, phthalates and other chemicals have an anti-testosterone capacity that has been linked to obesity. In women they mess up our basic genetic hormone balance so that you get disruptions similar to those that might occur during the menopause or at puberty".

Time has come for precaution

Maida Galvez, a pediatrician involved in this study, says, "these findings can help them know to avoid such chemicals at key stages . Even if these chemicals play a small role in obesity, it's a preventable exposure". She urges consumers to select fragrance-free or organic-certified cosmetic products .

Without a break, the Mount Sinai team sends another warning against Bisphenol A , a substance that may be also high in "chemical calories". Keep in mind that, after a long battle, Bisphenol A is now banned in baby's bottles in Europe.