Titanium dioxide nanoparticles: a danger for the brain Add to my portfolio
pro subscription only feature
see our subscription plans 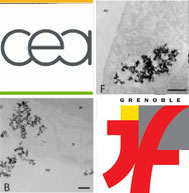 Titanium Dioxide nanoparticles are used in consumer goods such as paints, self-cleaning coatings, medicines or cosmetics. They are often present in sunscreens, but also in toothpastes, face care creams… Researchers have found that they alter an essential physiological barrier that protects our brain from toxic substances. After their conclusions, a repeated exposure to these nanoparticles may impair some brain functions.

The research is a common work by the French Commissariat à l’Energie Atomique (CEA; the French governmental body of research on nuclear energy) and the Joseph Fourier University  (UJF) in Grenoble.  The results have been published in the Biomaterials journal on October 24.

Researchers have found that an in-vitro exposure to Titanium Dioxide nanoparticles makes them accumulate in the brain endothelial cells.
It is also the cause for a break in the blood-brain barrier, associated to an inflammation, and for a diminishing activity of the P-glycoprotein, a protein essential to get rid of harmful substances from vital organs, such as brain.

In a statement issued on 26 October, the CEA reminds us of a study already performed on rats that demonstrated that, after an intranasal instillation, some Titanium Dioxide nanoparticles are detected in the brain, especially in the hippocampus and in the olfactory bulb.

Researchers, then, wondered how these nanoparticles could be found in the brain, as it is supposed to be protected by a specific structure: the blood-brain barrier (BBB).
To answer this question, teams from the CEA and UJF used an in-vitro cellular model, they have developed to duplicate this protective barrier. This model builds the barrier combining two kinds of primary cells: endothelial cells (bloodstream), grown on a semi-permeable membrane, and glial cells (nervous system). It duplicates the main characteristics of the BBB in-vivo, even those of the human barrier.

Thanks to this model, researchers have shown that an acute and/or a chronic exposure of the BBB to Titanium Dioxide nanoparticles leads to an accumulation of these particles in the endothelial cells. Further, it impairs its protective function, on the one hand, by breaking the barrier, on the other hand, by diminishing the activity of the P-glycoprotein, a protein present in the endothelial cells to prevent toxins from entering the central nervous system.

As a conclusion, after the CEA, Titanium Dioxide nanoparticles may be the cause for a cerebrovascular inflammation. Further, the researchers suggest that a chronic exposure to these particles, in-vivo, may lead to their accumulation in the brain with a risk of impairing some brain functions.