DeFY Cosmetic: a terrific duo in cosmetics Add to my portfolio
pro subscription only feature
see our subscription plans 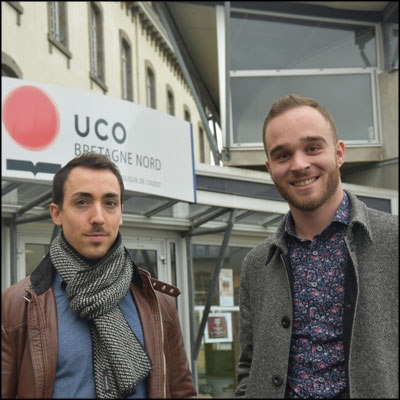 The school is not far behind them, and yet Ludovic Lemée and Romain Derrien have just founded their cosmetics brand, DeFY Cosmetic. Just 25 and 26 years old, they have the audacity of their twenties and did not hesitate long before embarking on an entrepreneurial project. After all, when the desire and talent are there, why wait?

On one side, there is Romain Derrien, from Saint-Brieuc.  As a teenager, he remembers having a real crush on learning chemistry.
“I knew right away that this was what I wanted to do, so my schooling was then built around this idea,” he says.

It was also during this period that he began to develop a certain taste for the field of cosmetics.
A heavy user of hair and shaving products, he tried to decipher the INCI lists, but unfortunately, at that time, he still lacked the knowledge!
He then pursued a classical course, obtained a scientific baccalaureate and entered the Math Sup preparatory course in order to enter an engineering school.
After one year of preparatory class, he decides to reorient himself, taking into account the too theoretical aspect of his training.
He has a dual degree in physics and chemistry in Rennes, and already wishes to join a cosmetics program. At the end of this cycle, he enters the UCO in Guingamp. As happy as he is to continue his studies in this direction, Romain Derrien happens to be the only boy in a promotion of 31 girls… a position not always obvious.
While his first year at UCO is not the most fulfilling given the lack of male support in the ultra-dominant world of women, he is still continuing.

On the other side, there is Ludovic Lemée, also Breton by origin of his grandmother, but living in the Paris region. The young man has always had an appetite for science.
He is therefore preparing a bachelor’s degree in Engineering Sciences. Finally, the overly mechanical and mathematical aspect of the training overwhelms him. Once he graduated, he turned to a biology degree.
“At that time, I had the hope of working for the pharmaceutical industry. When I arrived at the University of Cergy, I didn’t realize that it wasn’t for me. I didn’t want to do business on people’s health, I needed a little glamour. I realized that I wanted to create products that would generate pleasure. So I finished my degree with the conviction that I had to specialize in cosmetics,” he says.
He applied to several schools and joined the Guingamp UCO. For him too, it’s a small shock.
Moving from the Paris region to a city with 7,000 inhabitants can also be confusing!

They both enter Master 1, but do not yet know each other.
From the first day, Romain Derrien spotted four other boys in the promotion and luckily, Ludovic Lemée was sitting right behind him.
It is thanks to a “want to have a drink after class?” launched by Romain that the two acolytes (accompanied by the other boys) get to know each other.
At the end of the evening, the group decided to participate in the U’Cosmetic student competition, organized every year by the UCO. In parallel with their studies, they are working on a phosphorescent memory gel project, formulated with quinine to meet the imposed theme of the “Cosmetic Experience”.
The concept won over the jury and the 100% male group was awarded the first prize in the “Innovation” category.

In the euphoria of victory, they decided to return the following year, while the last year of the master’s degree was alternating.
But it takes more than that to scare them off. Both working at L’Oréal in the Paris region, they continue to study in Guingamp and at the same time work on their project for the U’Cosmetic competition (on mineral cosmetics).
This time, they won the second formulation prize, a nice prize.

The end of studies… and the beginning of everything!

Everyone finishes their course. At the end of his internship, in August, Romain Derrien, flew to the United States, thanks to a former internship supervisor who offered him the opportunity to work for one year for Fareva Laboratories.
Ludovic Lemée, for his part, has his contract extended by a few months at L’Oréal.

While one works on the other side of the Atlantic, the other is beginning to mature very strongly a business project.
“I called Romain to ask him if he didn’t want us to go for it together. With our two successful experiences at U’Cosmetics, I knew we were a good teammate,” says Ludovic Lemée. “He convinced me that this was the perfect time to start,” Romain Derrien continues. “My contract in the United States was for a fixed period of time, when I returned, I had nothing planned. It was the perfect time to get started, try new experiences and above all not regret anything.”

Determined to undertake together, all they have to do is find the right idea.
“Today, a large part of the communication of beauty companies goes through Instagram. In most cases, they use influencers, pay them and give them a script to follow. It is therefore not transparent to the consumer,” explains Romain Derrien. “Based on this observation, we tried to find the best concept that could serve the interests of users, influencers and us at the same time,” adds Ludovic Lemée.

The two terrible children of cosmetics have developed a concept of personalized care products for influencers.
After carefully selecting the profiles of public figures most appropriate to their project, they contact them and propose a whole catalogue of products, which will then be shaped and formulated to the tastes of the influencer, as far as possible, of course.
To start this adventure, they were able to count on the support of the UCO, which provided them with a laboratory.

The two accomplices recount that their first collaboration was with “the Rennes influential Juliette Kitsch. She was thrilled by the project and wanted lip balms. Her main requirements were the packaging, since she didn’t want a stick, and the fragrances she wanted flowery, but not heady. We then set off on a packaging in the shape of a gouache tube and on olfactory notes of lavender, clementine and mimosa. A real challenge that was met with flying colours. We sent her about fifteen formulas until she was completely satisfied. She also came to see us in the lab, she got into the game. For us, it is important that the person who collaborates sees the other side of the picture in order to speak openly to their community.”

The first lip balms were released on February 13, 2019 and received a warm welcome.
The duo is already working on the release of new products.
At the same time, these all-rounders of beauty give courses to young students and provide scientific cosmetic training in works councils in order to popularize the practice among the general public (we are far from the DIY course).

What about the fluorescent gel that made them successful in the U’Cosmetics competition?
The product was unanimously acclaimed for its originality and novelty.
But the shape memory gel that was the basis of it was the property of an ingredient supplier to whom they left the formula.
Today, the product is marketed in Asia and the Middle East… But they don’t regret anything!
To thank them, the ingredient supplier in question offered them a two-year mission to Japan… which they refused to do in order to devote themselves better to their own projects.
The ardour of youth does not wait!