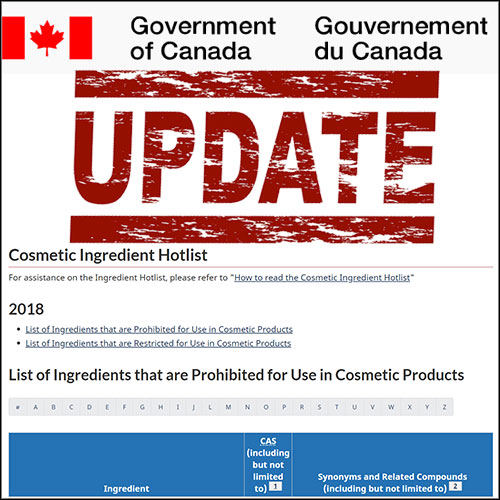 On May 3, 2019, Health Canada opened a consultation on several updates of the Cosmetic Ingredient Hotlist. In the scope: the authorisation of Dihydrocoumarin and Thiurames which were previously prohibited, the mandatory labelling of a warning statement for eucalyptus essential oil, the prohibition of Sodium Bromate and new conditions of use for Thioglycolic Acid and its salts.. The consultation is opened until July 1st, 2019.

In the words of the Canadian institution, the Cosmetic Ingredient Hotlist is “an administrative tool that Health Canada uses to communicate to manufacturers and others that certain substances, when present in a cosmetic, may contravene the general prohibition found in section 16 of the Food and Drugs Act or a provision of the Cosmetic Regulations.”
Its last update was in September 2018.
The one proposed today covers five ingredients.

A revision is being considered to change this entry from a prohibition to a restriction.

Health Canada’s explanation
The ingredient is naturally occurring in some plant derivatives at low levels. A review of the available scientific data indicates that the ingredient may cause sensitization at higher concentrations but can be used at low levels without significant risk.

Regulation in Europe
The substance, when used as a fragrance ingredient, is listed in Annex II (Prohibited Substances) to Cosmetics Regulation.

A revision is being considered to combine these entries under a single entry for “Thiurams”. This entry will also encompass thiuram tetrasulfides which are not presently captured ...