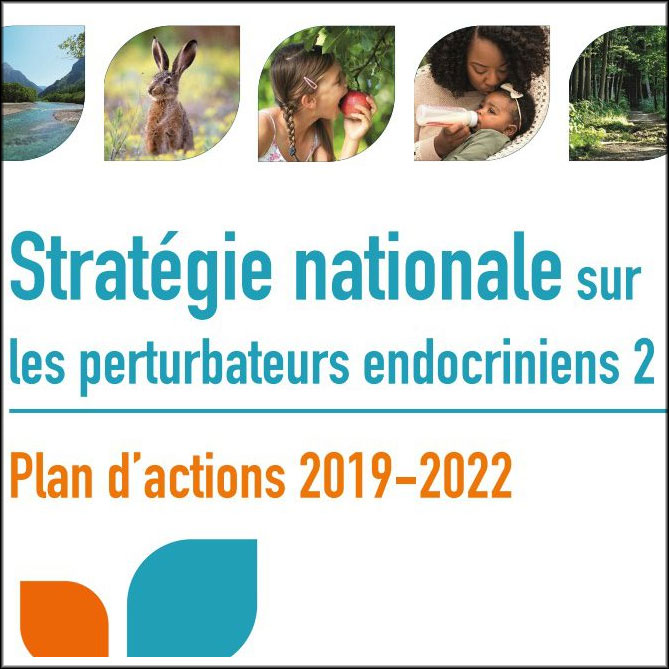 On September 3, 2019, the French government presented a second national strategy on endocrine disruptors to reduce population exposure and environmental contamination. It is announced as aiming “to reduce the population’s exposure to endocrine disrupters and environmental contamination through research and expertise, public information, training of professionals and better regulatory framework.”

This second strategy is structured around three priority issues.

1. Training and information, so that everyone can act in full knowledge of the facts

• In 2020, a list of endocrine disruptors will be published and shared with other European countries.
• A public information campaign will be launched to raise awareness of the risks associated with the use of certain chemicals.
• Because pregnant women and children are particularly vulnerable populations, Santé Publique France has launched the website “Agir pour bébé” (Act for baby) giving practical advice to limit their exposure to chemicals including endocrine disruptors. Note: for each room in the house, this site indicates the points of vigilance. In the bathroom, it is indicated as follows: “We limit make-up when we are expecting or breastfeeding a baby. Why? Why? Some foundations may contain harmful chemicals suspected of being endocrine disrupters or allergens.”
• Finally, health and early childhood professionals, or local government officials, will be trained in good practices to limit exposure to disruptors.

2. Protect the environment and populations because “acting on ecosystems also means acting on our health”

• France will ask the European Commission to revise the regulations that apply to everyday objects, in particular cosmetics and toys, in order to take into account endocrine disruptors.
• Data on environmental contamination by endocrine disruptors will be centralized on an open data portal (data.gouv.fr).

3. Improve knowledge by accelerating research, including on the health impacts of endocrine disruptors

• The French Biodiversity Agency has already published in June 2019 a call for research projects to better understand the effects of endocrine disruptors on biodiversity.
• For the first time, a study is measuring the presence of endocrine disruptors in children and adults in a large sample. The ESTEBAN study effectively shows the impregnation of the French population with organic contaminants (bisphenols A, S and F). While these initial results highlight a broad impregnation of the French population and a generally higher level of impregnation of children than adults, the levels measured are comparable to those of other studies conducted abroad, such as in Canada or the United States, the government statement says, adding that these initial results confirm the need for further action to limit exposure to chemical substances.

Finally, the ministers recall that this new strategy is part of the “My Environment, My Health” mechanism of the National Health Environment Plan, which is due to start in 2020 and is currently being developed.
“Better knowledge of pollution, information and training, reducing exposure and increasing the number of concrete actions in the territories are the main axes of the government’s environmental health policy,” the press release concludes.

The 12th edition of Cosmetagora, organized by the French Society of Cosmetology, took place on 14 and January 2020. In addition to being able ...

Greentech Laboratories, in association with Deinove, are positioning themselves in the “ageing well” segment. Convinced that “positive ageing” is tomorrow’s ...

Poly- and perfluoroalkyl substances (PFAS), also known as fluoroalkyl, are an important group of substances used in a wide range ...

The SCCS has just published its Opinion on the safety of the hair dye ingredient Indigofera Tinctoria. It was adopted ...

Health Canada has just released a “Notice to Stakeholders” relating to several proposed amendments to the Cosmetic Ingredient Hotlist. The ...

The long-awaited 49th Amendment to the IFRA Standards has just been published on 10 January 2020. It incorporates new data, new methods and new ...

Jan. 13, 2020 A Swiss Consumers' Federation is calling for a ban on three cosmetic ingredients p

In a press release made public on 7 January 2020, the FRC (French-speaking Consumers’ Federation) denounces the “timidity” of the Swiss Federal Council ...

Initially a source of disgust, bacteria are now widely used by the scientific community, including in cosmetic research. For a ...

Because the sustainability of raw materials is as important to consumers as the efficiency of finished products, manufacturers are increasingly ...

Jan. 7, 2020 Two acrylates classified as "possibly carcinogenic to humans" by the IARC p

Volume 122 of the recently published IARC Monographs contains the results of the carcinogenicity assessment of six substances, including two acrylates that ...

It was through an amendment (CD1857) to the law on the fight against waste and the circular economy that the ...

At the end of 2019, ANSES (National Agency for Food, Environmental and Occupational Health and Safety) published its work programme for 2020, ...