It took some time, but, yes, it seems now that the new COSMOS-Standard frame of reference for natural and organic cosmetics is really and truly ready. If a proof is needed, the the April 2011 press release by the COSMOS-Standard association AISBL, recognizes new certification bodies, and displays also the new logo that will be seen on labels.

CosmeticObs-L’Observatoire des Cosmétiques heralded the information in February : the COSMOS-Standard is at last arriving. This new logo dedicated to natural and organic cosmetics, after long negotiations to harmonize as a unique European logo the different national logos already used (mainly Cosmébio, Ecocert, BDIH, ICEA and Soil Association), needed some tiny adjustments before being put in operation.

It has now come to the end, when the Cosmos-standard AISBL association opens its process to recognize new certification bodies, which will certify after the Cosmos standard. Any European or non-European body may apply.

At the same time, this press release displays the new logos, which will be on labels of the products certified under this new frame of reference… in fact, exactly the logos we already knew, with an add-on: the COSMOS “signature”, with comes in two levels, “Natural” and “Organic”, depending on the percentage of respectively natural ingredients or organic ingredients from organic agriculture in the product. 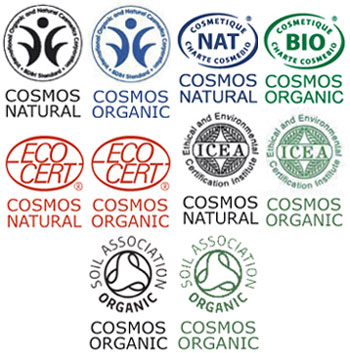