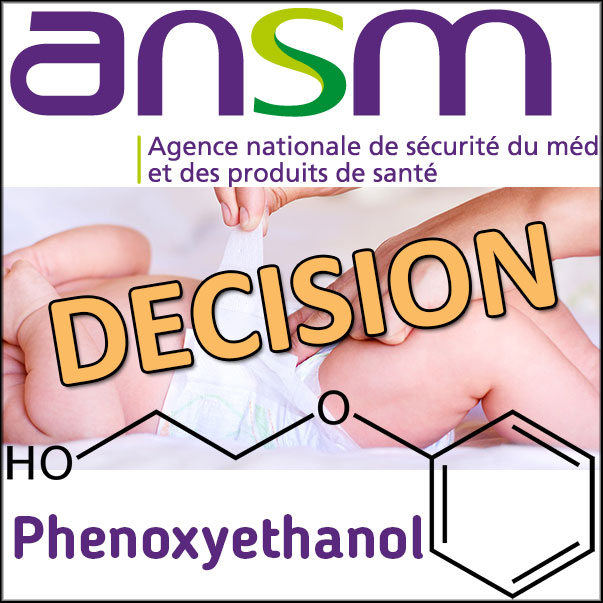 By a Health Police Decision of 13 March 2019, published on the ANSM website on 20 March, the French National Agency for the Safety of Medicines and Health Products requires manufacturers of leave-on cosmetic products containing the preservative Phenoxyethanol to indicate on the label that they may not be used on the buttocks of children aged 3 years or under. The Responsible Persons for making these products available on the market have a 9-month period to apply this measure.

In June 2018, and despite the fact that the European scientific experts of the SCCS had not followed it (at least until now) on this dossier, the ANSM confirmed its reservations on the safety of Phenoxyethanol, in particular when this preservative is used in cosmetic products intended for use on the diapers area of babies and children under 3 years.
The Agency is continuing to build on its momentum with this Health Policy Decision.

Here is the text of the statement published by the ANSM.

The ANSM requires that so-called “leave-on” cosmetic products containing the preservative phenoxyethanol be labelled as not suitable for use on the buttocks of children aged 3 years or younger. This is the case, for example, for wipes, which are very commonly used for changing babies. This decision must take effect within 9 months.
This decision was taken, as a precautionary measure, in the light of new scientific data on exposure to phenoxyethanol, in order to guarantee the safety of cosmetic products intended for children, pending a decision by the European Commission.

The ANSM has been monitoring and conducting investigations on phenoxyethanol for several years. As a precautionary measure, the ANSM recommended in 2012 that this preservative should not be used in cosmetic products intended for baby buttocks and that its maximum content should be set at 0.4% for other products intended for children under 3 years of age. Subsequently, the European Scientific Committee for Consumer Safety (SCCS) considered, in its October 2016 opinion, that phenoxyethanol used at 1% in cosmetic products is safe for all age groups.

The ANSM wished to continue its investigations and at the end of 2017 set up a temporary specialized scientific committee (CSST) composed of experts in toxicology, epidemiology, expology, dermatology and allergology whose mission is to evaluate the opportunity to maintain its 2012 recommendations. The experts concluded that “the 2012 recommendation for the non-use of phenoxyethanol in cosmetic products intended for buttocks should be maintained. It is advisable to extend it to wipes, which are very commonly used to clean young children’s diapers area. In all other cosmetic products intended for children 3 years of age or younger, the maximum concentration of phenoxyethanol could remain at 1%.”

On the basis of this opinion, the ANSM therefore adopted, as a precautionary measure, a Health and Safety Decision requiring Responsible Persons who make so-called “leave-on” cosmetic products (excluding deodorants, hair and make-up products) containing the preservative phenoxyethanol available on the market to indicate on the label, at the latest within 9 months of the publication of this decision, that they may not be used on the buttocks of children 3 years of age or less.

For other products intended for children aged 3 years or younger, the 1% concentration of phenoxyethanol is applicable, in accordance with the European Cosmetic Products Regulation (Regulation 1223/2009).

Phenoxyethanol is a preservative used in various cosmetic products, including those used when changing babies. Toxicological studies suggest that phenoxyethanol is toxic to reproduction and development in animals at high doses, but no such effects have been reported in humans.

In its Considerations, the ANSM recalls that:
• A cosmetic product may only be made available on the market if it presents a high level of protection of human health
• The margin of safety should be at least 100 so that the use of a substance in a finished product can be declared safe
• The ANSM risk assessment in 2011 showed that the margins of safety are not sufficient for children under 3 years of age, and the Agency then recommended a ban on phenoxyethanol in cosmetics for the buttocks of children under 3 years of age and a restriction of its concentration to 0.4% in other products
• The SCCS did not follow this position and confirmed that phenoxyethanol use was safe at 1% for all age groups,
• New studies (Ficheux et al., 2016) provide additional exposure data, which have been taken into account by a CSST (Comité Scientifique Spécialisé Temporaire) set up by the ANSM
• This CSST concluded that the ANSM recommendation not to use phenoxyethanol in cosmetics intended for the buttocks (a particularly sensitive and frequently damaged area, which promotes the absorption of phenoxyethanol) must be maintained and extended to wipes, which are very commonly used to clean the diapers area

The Agency therefore decided that:
1. As a precautionary measure, pending the European Commission’s decision in accordance with the provisions of Article 27 of Regulation 1223/2009 (Safeguard clause), the availability on the market of leave-on cosmetic products containing phenoxyethanol (excluding deodorants, hair and make-up products) is subject to the indication on their labelling that these products may not be used on the seats of children aged 3 or under.
2. The Responsible Persons who make the cosmetic products referred to above available on the market shall take all necessary measures to comply with this Decision within a period of 9 months at the latest from its publication.

All the products involved marketed in France will therefore have to comply with this obligation from 20 November 2019… unless the European Commission decides otherwise.

Indeed, Article 27 of the Cosmetics Regulation clearly provides that ‘where a competent authority ascertains, or has reasonable grounds for concern, that a cosmetic product or products made available on the market present or could present a serious risk to human health, it shall take all appropriate provisional measures in order to ensure that the product or products concerned are withdrawn, recalled or their availability is otherwise restricted.’
But it also states that ‘The Commission shall determine, as soon as possible, whether the provisional measures referred to in paragraph 1 are justified or not. For that purpose it shall, whenever possible, consult the interested parties, the Member States and the SCCS.’

Then, two options: • The Commission considers that the measures taken at national level are justified: it extends them to all the countries of the Union and provides for the amendment of the Annexes to the Regulation in accordance with (in this case Annex V on preservatives) • If, on the contrary, these measures do not seem justified, the Commission shall inform the national authorities, who shall go back and repeal them

Who said, “Case to be continued…”?

Phenoxyethanol: the French ANSM questions its safety for young children

In a new evaluation of the risk linked to using phenoxyethanol in cosmetics, the French ANSM surveys all the currently available data. Its report, release, beginning May 2012, concludes that there is a safe enough margin for adults, but not for children under three. Therefore, the Agency recommends more stringent restrictions ... 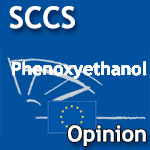 The European Scientific Committee on Consumer Safety (SCCS) has just published its Opinion on Phenoxyethanol. It has been adopted at the plenary meeting on 16 March 2016, and is open for comments until May 31, 2016. Conclusion: this preservative is safe in cosmetics, at the current maximum concentration, for all consumers, whatever their age. 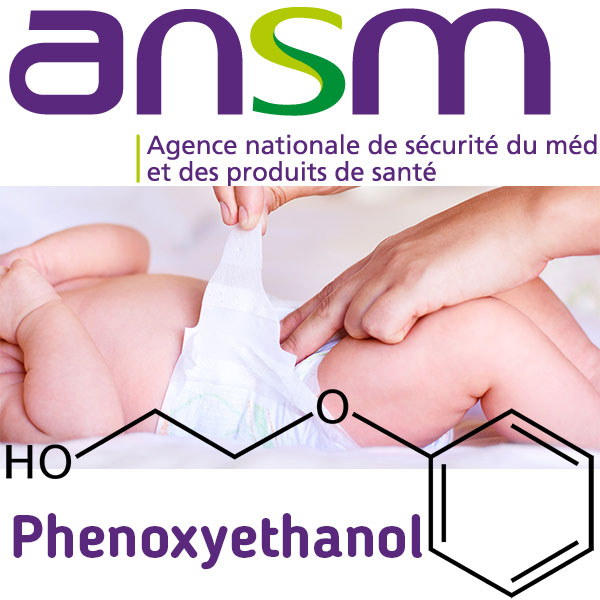 In 2012, ANSM (French National Agency of Medicine and Health Products Safety) recommended not using Phenoxyethanol in cosmetic products intended for the baby’s bottom. This recommendation had not been validated on the European level. But the French Agency has just published the results of the research done by a Temporary Specialist ...

Jan. 7, 2020 Injunction of the ANSM to the company Unilever HPC p

It is because of “non-compliances and significant deficiencies” that the ANSM has just sent to Unilever HPC company a compliance ...

ANSM has just published a Decision, dated December 26, 2019, which suspends the marketing and distribution, and orders the withdrawal of cosmetic ...

It is because of “non-compliances and significant deficiencies” that the ANSM has just sent to NEOCOS company a compliance injunction ...

On March 27, following the ANSM Health Policy Decision on Phenoxyethanol, CosmeticOBS- published an article outlining the reaction of professional cosmetic ...

March 27, 2019 DPS Phenoxyethanol: a hostage taking of the industry by the ANSM? p

In order to facilitate the declaration of alerts made by whistleblowers and to strengthen their follow-up, the National Agency for ...

Dec. 16, 2018 Injunction of the ANSM to the company Bio Perche Cosmétiques & Senteurs p

It is because of “non-compliances and significant deficiencies” that the ANSM has just sent to Bio Perche Cosmétiques & Senteurs ...

Nov. 18, 2018 Injunction of the ANSM to the company Prodene Klint p

It is because of “non-compliances and significant deficiencies” that the ANSM has just sent to Prodene Klint company a compliance ...

Sept. 22, 2018 Injunction of the ANSM to the company Probionat Provence p

It is in the name of"nonconformities and significant breaches" that the ANSM has just sent Probionat Provence a compliance injunction ...

Aug. 24, 2018 Injunction of the ANSM to the company Laboratoires Cinq Mondes

It is in the name of"major non-conformities and shortcomings" that the ANSM has just sent Laboratoires Cinq Mondes an injunction ...

It is in the name of"non-compliances and significant breaches" that the ANSM has just sent the companies Lessonia, Alès Groupe ...

July 6, 2018 Injunction of the ANSM to the Lorcos company p

It is in the name of"nonconformities and important failures" that the ANSM has just sent to the Lorcos company an ...