Butylphenyl methylpropional: a name to keep in mind… and ban Add to my portfolio
pro subscription only feature
see our subscription plans 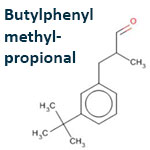 Its official designation sounds so barbaric, that Butylphenyl methylpropional is often referred to with its main trade name: Lilial. In addition, the toxicological profile of this perfuming substance present in numerous cosmetics seems altogether unacceptable, since the European Scientific Committee on Consumer Safety has just deemed it ‘not safe’ for human health.

Its chemical name is 2-(4-tert-Butylbenzyl)propionaldehyde, its acronym, BMHCA, and its INCI name, which is used in the lists of ingredients on cosmetics packaging, Butylphenyl methylpropional. It is also known under its trade names, including Lilial® or Lysmeral® Extra… When it is pure, this synthetic substance presents itself in the liquid form, it is colourless or pale yellow, and it has the specificity of diffusing an intense floral scent reminding of the lily of the valley.

This property explains why it is used in numerous perfuming compositions and many sectors of the consumer goods industry. For example, it can be found in all cosmetic product categories: soaps and shower gels, shampoos and hair care products, face and body creams and moisturizing milks, cleansers, deodorants, makeup, sun protection products, perfumes and eaux de toilette… And it is also present in biocidal products, paint and other products used in the building trade, printer ink and toners, shoe polish and varnish, or, more generally, all consumer goods that can be perfumed: clothes, toys, paper, etc.

Ubiquitous, indeed. But its safety is controversial, and it has just been seriously questioned in an Opinion dated 12 August 2015 published by the SCCS , the Scientific Committee on Consumer Safety, a European independent college that assesses cosmetic ingredients, among others.

In this Opinion, the SCCS reaffirms the sensitizing potential of Butylphenyl methylpropional. And it is no surprise, since the substance was already on the list of 26 allergens whose declaration is mandatory in the list of ingredients on cosmetics packaging, as soon as its concentration is higher than 0.01% in rinse-off products, and higher than 0.001% in leave-on products.

Even if it is classified as a moderate sensitizer, it is still, as the experts emphasize, likely to ‘pose a risk of inducing skin sensitization in humans’, which means it can trigger an allergy.

Here is another undesirable aspect of this substance highlighted in the SCCS evaluation: its ability to induce skin irritations following a topical application. Indeed, rash, redness, or even oedemas were observed by several experimentations.

Butylphenyl methylpropional also proves irritant for mucous membranes and for the eyes, but it should be noted that all these outward signs were observed at high doses and could be reversed.

However, the main charge against Butylphenyl methylpropional is its toxic potential for the human body, in particular for reproduction.
The substance is under study to possibly be classified as a CMR2 (substances suspected of being carcinogenic, mutagenic, or reprotoxic for humans) for its possible effects on fertility.

And the SCCS mentions several studies that confirm this characteristic.
Following contact with repeated doses, weight loss and in particular testicular atrophy were observed in several animal species.
Even if, again, these effects were observed at high doses and the absorption of the substance by human skin seems relatively low, it still exhibits a systemic bioavailability that leads experts to conclude it has potential harmful effects on the male reproductive system.                                        They also note that the scientific data available are not convincing enough to be able to make a ruling on its mutagenicity (the ability to induce gene mutations).

In their Opinion, the experts never use the term ‘endocrine disruptor’… although the effects described inevitably remind of them, and a study published in 2009, conducted by two women researchers of the University of Reading, UK, already related Butylphenyl methylpropional to an oestrogenic activity ( Oestrogenic activity of benzyl salicylate, benzyl benzoate and butylphenylmethylpropional (Lilial) in MCF7 human breast cancer cells in vitro , Charles and Darbre).

Calculating the safety margin is a key factor in determining the harmful potential of a substance for humans. It takes into account various factors such as skin absorption (the quantity of substance that can be absorbed by the skin and penetrate the body) and the exposure to the substance (the quantity to which a person can be exposed through the use of different products).

In 2013, IFRA (the International Fragrance Association, which defends the industry’s interests as regards the use of perfumery ingredients) submitted a file to the SCCS experts, which pleaded in favour of the safety of use of Butylphenyl methylpropional. Among others, this file contained the concentration limits to which the substance was present in the various categories of cosmetics.
But in 2015, the same association transmitted additional information to the SCCS on the current use levels of the substance. The experts observed huge differences in the figures, plus certain product categories had disappeared, while others were new…
And be it as it may, all cases made them conclude on too low safety margins.

It is on the basis of all these conclusions that the SCCS very firmly states that Butylphenyl methylpropional is not safe…. which is valid for the toxicological profile of the substance, as its sensitizing nature is also reaffirmed.

Which consequences can this Opinion have?
The usual process first consists in giving the industry some time to adjust and possibly have the opportunity to present its counter-arguments. Here, the period was to end on November 10, 2015, but it was finally extended to December 31.
Given the arguments used, the SCCS will then review its Opinion, which it will either confirm or modify. Then, it will be up to the European Commission to integrate these recommendations into regulations. If the August 2015 Opinion stays the same, Butylphenyl methylpropional should be banned from cosmetic products.

Meanwhile, before this (long) process comes to an end, and it can last several months, or even years, the substance will actually remain in cosmetics, and in high quantities.
And, as usual with this type of situation, one can only encourage cosmetic perfume designers to quickly work on their reformulations, and recommend consumers to scan the lists of ingredients on their products and avoid those containing Butylphenyl methylpropional. 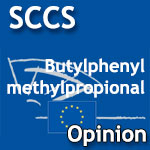 This Opinion of SCCS has been adopted on 12 August 2015 by written procedure and has just been published. Its conclusion: the cosmetic fragrance ingredient Butylphenyl methylpropional is not safe. This opinion has been opened for comments until 10 November 2015, then until 31 December 2015.