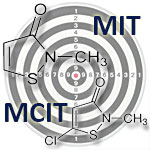 These preservatives, like many others, regularly draw the attention of the cosmetics media. For several years, they have been cause for worry and the subject of alerts issued by dermatologist organizations or health authorities due to their strong allergenic potential. Now, they are targeted by European regulators, who intend to limit their use and even prohibit them in certain products.

There was a time when Methylisothiazolinone (MIT) and its official companion, Methylchloroisothiazolinone (MCIT), had wind in their sails. Many considered them to be the best, almost ideal solution to preserve cosmetic products.

The wave of isothiazolinones

The peak occurred when parabens were the subject of widespread finger-pointing. To replace them and remove their names from increasingly scrutinized labels, manufacturers were looking for preservatives that would be effective in preserving products from microbiological damage, not too expensive, and… preferably unknown to the general public not to be likely to be rejected. MIT and MCIT filled all these criteria, even though their allergic potential was already well documented.

Both belong to the chemical family of isothiazolinones, biocidal substances whose effectiveness is known to halt bacterial development in preparations containing water, which is the case for the overwhelming majority of cosmetic products.

MIT (2-methyl-4-isothiazolin-3-one) can be used alone, but initially, it was more often used in combination with MCIT (5-chloro-2-methyl-4-isothiazolin-3-one), particularly in rinse-off personal hygiene products (shower gels, shampoos, body wash for babies, etc.). Like all preservatives officially listed in European laws, their use was regulated and limited to a maximum concentration of 0.0015% of the finished product, at a MCIT:MIT ratio of 3:1.

Later, the use of MIT alone became widespread in face and body care products and in wipes, and then in almost all cosmetic product types. Again, regulations set a limit of 0.01% of the finished product.

The ugly side of MIT and MCIT

These substances were sometimes criticized for their long list of drawbacks. But we must emphasize that all preservatives can develop a bad reputation, occasionally or permanently. And it should be reminded that, intrinsically, preservatives are killers. Bacteria, micro-organisms, mould… a host of things that have no place in a cosmetic product, to be sure. But preservatives are killers nonetheless, and they are not always gentle, even if they are crucial to ensuring the safety of use of the product… and consumer safety.

MIT and MCIT have been criticized for being skin irritants or brain toxins, based on studies carried out on rats, but health authorities have never taken this into consideration. The main problem with these substances still remains their sensitizing potential.

Alarm bells have been ringing for several years about the combined use of MIT and MCIT. They are listed by name in the cosmetovigilance report on undesirable effects caused by cosmetics published by the AFSSAPS (now ANSM, the French National Agency of Medicine and Health Products Safety) in 2010, and they are in the list of “allergens most frequently implicated” in allergic reactions.

Dermatologists are worried too. At the December 2008 session of the Dermatological Days in Paris, it was pointed out that “Kathon CG® (the most common brand name for the MIT/MCIT mixture) is a very common allergen.” And at the 2012 Dermatological Days, the SFD (French Dermatology Society) issued a warning about MIT alone, insisting on the fact that “dermatologists are observing more and more frequent reactions to this preservative, primarily in the form of contact eczema.”

Evidence is accumulating and the pressure is rising. As a result, regulatory authorities have been focusing on the issue.

The regulatory path towards a ban

Over the years, several European expert opinions had already been requested. All experts concluded that these preservatives were safe for consumer use at the maximum doses allowed by law. But the SCCS (Europe’s Scientific Committee on Consumer Safety) expressed a slight nuance in their 2009 opinion: “On the basis of the data submitted, the SCCS is of the opinion that the mixture of 5-chloro-2-methyl-4-isothiazolin-3-one and 2-methyl-4-isothiazolin-3-one in a ratio of 3:1 does not pose a risk to the health of the consumer when used as a preservative up to a maximum authorized concentration of 0.0015% in rinse-off cosmetic products, apart from its sensitizing potential.”

Of course, “apart from” says it all.
The European Commission seized upon this little phrase in the summer 2013 and launched a public consultation on MIT/MCIT. The idea was to limit their combined use to rinse-off products, thereby prohibiting their use in leave-on products.

While they were at it, the Commission also targeted MIT, requesting, in September 2013, the SCCS’s opinion on the safety of this substance when used alone.
The motive? “Several Member States raised concern on the use of Methylisothiazolinone (MIT), as data demonstrates that MIT is a sensitizer in animals and a contact allergen in humans. The Commission received information on the issue of the sensitizing potential of MIT starting from 2011. (…) According to some Member States and literature, the sensitization to MIT is becoming an increasing problem all over Europe, particularly with sensitization in young children from moist toilet paper/hygiene moist tissues or cosmetics.”

December 2013: the experts gave their verdict in an Opinion.
"Current clinical data indicate that 100 ppm MIT in cosmetic products is not safe for the consumer.
For leave-on cosmetic products (including “wet wipes”), no safe concentrations of MIT for induction of contact allergy or elicitation have been adequately demonstrated.
For rinse-off cosmetic products, a concentration of 15 ppm (0.0015%) MIT is considered safe for the consumer from the view of induction of contact allergy. However, no information is available on elicitation."

Let’s decipher the administrative language: If 100 ppm (0.01%) is not safe for the consumer, it means that the maximum authorized percentage must be lowered. But as no safe concentrations of MIT for induction of contact allergy or elicitation have been adequately demonstrated for leave-on cosmetic products, it simply means that MIT must not be authorized in this type of product.
Finally, as for rinse-off cosmetics, the SCCS recommends drastically reducing the maximum authorized concentration, from 0.01% to 0.0015%.

The decision was made in late September 2014 for the MIT/MCIT mixture. Following the opinion of the experts, the European Commission published a regulation (no. 1023/2004) to limit its concentration at 0.0015%, only in rinse-off products.

It still remained to deal with MIT used on its own.
And the industry representatives had already taken the initiative et déjà: on December 13, Cosmetics Europe, the European professional association for the cosmetics industry, published a recommendation for the entire industry recommending “that the use of Methylisothiazolinone (MIT) in leave-on skin products including cosmetic wet wipes [be] discontinued.”
Still, it took as long as three years for the Commission to also follow the SCCS Opinions, and it is in July 2016 that Regulation 2016/1198 banned MIT in leave-on products… as from February 12, 2017.

And it was not over just yet.
Indeed, the industry was trying to save all the applications possible for this preservative in cosmetics.
Cosmetics Europe, considering that the concentration limit of MI to 15 ppm “would be insufficient for effective preservation in the majority of commercially available products,” sent a dossier to the European Commission to ask for a new assessment of MIT in rinse-off and hair leave-on products.

This Opinion has been taken into account by the European Commission, which launched a public consultation in April 2016 on a draft regulation with two objectives:
1. Restricting the use of MI to 15 ppm in rinse-off products, with the obligation of a “contains methylisothiazolinone” labelling
2. The use of MI as a preservative in hair leave-on cosmetic products is banned

Once the consultation was completed, these provisions were endorsed by Regulation 2017/1224 of July 6, 2017. They have been fully applicable since 27 April 2018.

With all these restrictions, and the recurrent media bad-buzz, these two preservatives have been further neglected by the formulators. But they are still found in some rinse-off hair products (shampoos and conditioners, particulary). They can be identified in the ingredient lists by their INCI names: Methylisothiazolinone, Methylchloroisothiazolinone.