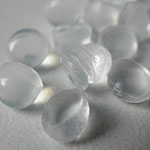 Microbeads are among the cosmetic ingredients used to formulate many products. If they used to be on a roll thanks to their exfoliating properties and low cost, they are now disparaged because of their negative environmental impact.

The microbeads found in scrubs, exfoliating products, toothpaste and other products, are based on polyethylene, a stable thermoplastic resin which helps it resist against chemical agents and shocks.
These polyethylene microbeads are derived from the petrochemical industry.

Why use them in cosmetics
Polyethylene microbeads are much favoured by the cosmetics industry for their exfoliating, film-forming, and viscosity-controlling action.
In addition, they are essential to many product formulas due to their gentleness: they are perfectly spherical and smooth, and there is no risk to find a micro-bone (it might happen with nut microbeads), which would be likely to damage the skin.
Lastly, they are used by cosmetics players all around the world because they are cheap and easy-to-use.

Why are they controversial?
It is actually the well-known stability of polyethylene that raises an issue, as this characteristic makes microbeads non-biodegradable.
When they are incorporated in rinsed-off products, treatment plants cannot filtrate them, so they can be released into the environment.
The impact on fauna and flora is huge, since right now, microbeads can be found in the entire marine environment. And as they do not decompose, they attract persistent organic pollutants (POPs), and are ingested by many marine species. And if some of these species are fished, polyethylene microbeads can land in consumers’ food.

The end of polyethylene
While major cosmetics players (L’Oréal, Procter & Gamble, Johnson & Johnson) have announced they are willing to no longer integrate polyethylene microbeads in their formulations, many governments have launched procedures for a strict ban on the use of this ingredient in ‘rinsed-off products intended to be used to exfoliate or cleanse’. These bans should be implemented in the next few years in the United States, France, the United Kingdom, Canada, Korea, Taiwan, New Zealand…

Still, it is not the end of peelings or scrubs. In addition to the natural exfoliating products available (nuts and fruit kernels, bamboo silica, pumice stone, sand…), the cosmetics industry is working on substitution products that offer the same advantages as polyethylene, without its drawbacks.

Founded in Geneva in 1973, IFRA is the International Fragrance Association, the official international body representing the fragrance industry. Its main ...

What is a cosmetic product? We all have the feeling that we know this… but we can also make mistakes ...

This logo, awarded by the private company EthicAdvisor, aims to distinguish ethical products in three dimensions: the health, the social ...

Ecocert Environment is the “responsible” branch of the Ecocert certification body.

If you want to sculpt your own face, make it glow, and brighten your complexion without too sophisticated makeup, draping ...

This acronym was introduced by the REACH regulation (on the Registration, Evaluation, Authorization and restriction of Chemicals). A chemical identified ...

Layering is a skincare ritual that comes straight from Asia. This technique consists in applying different cosmetic products on the ...

What if washing your hair with shampoo was not the ideal hair care method? Based on this principle, the co-wash ...

Displaying a flawless, radiant glow is no longer enough: complexion sculpting has become common practice in the makeup sphere. Makeup ...

Baking follows the ‘hare-brained makeup trend’. Born on YouTube, this method consists in leaving makeup on your face for quite ...

The ‘veganism’ trend is increasingly more integrated to our lifestyles. Food, textile, and cosmetics are among the industries concerned, and ...